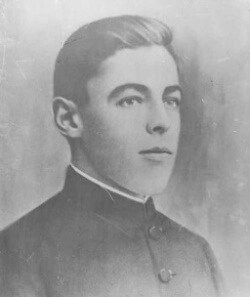 Wilbur Colyer was born on March 5, 1898 in Brooklyn New York. He was the only son of William Henry Colyer and Johanna H. Colyer. Wilbur Colyer enlisted in the U.S. Army in 1917. His regiment was sent to France in 1918. Sergeant Colyer was killed on October 10, 1918 near Verdun-sur-Meuse, Lorraine, France.

Collier joined the US Army in 1950 and was a corporal in Company C, 1st Battalion, 27th Infantry Regiment, 25th Infantry Division. Collier was killed-in-action during the Pusan Perimeter Offensive on September 19, 1950 and posthumously received the Medal of Honor and Purple Heart on June 24, 1951.

His citation from the War Department read: "The President of the United States of America, in the name of Congress, takes pride in presenting the Medal of Honor (Posthumously) to Sergeant Wilbur E. Colyer USA, for extraordinary heroism on 9 October 1918 while serving with Company A, 1st Engineers, 1st Division, in action at Verdun France. Volunteering with two other soldiers to locate machinegun nests, Sgt. Colyer advanced on the hostile positions to a point where he was half surrounded by the nests, which were in ambush. He killed the gunner of one gun with a captured German grenade and then turned this gun on the other nests silencing all of them before he returned to his platoon. He was later killed in action."

He is buried in Cypress Hills National Cemetery in Brooklyn.