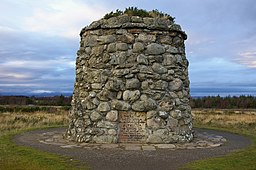 By 2 PM on Wednesday April 16, 1746, Prince Charles Edward Stuart's dream of restoring his father to the British throne died on Drumossie Moor. The Battle of Culloden had begun just about an hour earlier when the Hanoverian artillery opened up on the Jacobite lines and raked the front ranks for almost 30 minutes. Prince Charlie did not give orders to charge or to fall back and the formed ranks continued to suffer heavy casualties. The Atholl Brigade was on the far right of the front line next to a dry stone dyke. Finally, Lord George Murray, seeing the MacIntosh regiment start to advance, ordered his Athollmen to advance. The Atholl Brigade charged the Government army closely supported on the left by the Camerons and Stewarts of Appin. The initial highland charge was met by Barrel's and Wolfe's regiments on the Government's left flank. Behind the dry stone dyke were the Government's Campbell militia and Cobb's dragoons. The highlanders broke through the first units of the Hanoverian front line but the second line held. The Prince's left wing could not close on the enemy ranks due to the soggy broken ground and were forced to retreat under heave fire. With 30 minutes the battle was over and the remnants of the highland army fled the field. Cannons and muskets had defeated the targe and broadsword.

After his escape from the battlefield, the Bonnie Prince fully expected the clans to rally again at Fort Augustus. Alexander MacLeod, one of Charlie's aide-de-camps, sent a letter to Cluny Macpherson predicting that the Jacobites would "soon pay Cumberland in his own coin" and that his highness had "something in view which will make amends for this day's ruffle". Soon, the full implications of the defeat became apparent. The Prince sent word to his 1,200 supporters who had rallied at Ruthven Barracks under the leadership of Lord George Murray to "let every man seek his safety the best way he can".

Losses to the Jacobite army that day were immense. The Duke of Cumberland earned his nickname "The Butcher of Culloden" for ordering his troops to kill the Jacobite wounded after the battle. Our clan contingent, led by Donald Robertson of Woodsheal, suffered along with the rest of the Atholl Brigade. About half of its men were left on the field of battle. Donald was wounded and left for dead. His younger brothers, Alexander and Charles, both died. Alexander was killed while attempting to cut his way through to his wounded older brother while Charles died later from his wounds.

Certainly, the bravery of the Donnachaidhs at Culloden was not limited to the men of the clan. Christian Robertson Eastertyne, the betrothed of Prince Charlie's aide-de-camp James Johnston, rode over the blood-stained moors of Culloden seeking her wounded lover and upon finding him, lifted him onto her horse, escaped with him to a local cave where they hid through six weeks of endless peril while she fed and healed him. They eventually fled to safety and a new life in Canada.

In the summer of 1746, two companies of the locally raised Black Watch were ordered by the Government to scour Atholl in search of Jacobite fugitives who had not been included in the Act of Indemnity. Their orders were to burn the houses and lay waste the lands and property of the rebels. This assignment should never have been assigned at all, let alone to Scottish troops. Many times the allegiance of the soldiers was a t variance with their feelings.

One such fugitive was Robertson of Faskally. On one occasion, Captain John Menzies and his company were ordered to march in secrecy to Faskally's house during the night and capture the occupants of Faskally's home at daybreak. Faskally, James Robertson and several other gentlemen who were ‘in hiding' were all friends and relations of Captain Menzies. They barely had time to escape out the back door and dash into the deep woody glen while the soldiers were entering through the front door. According to General Stewart's account published in 1825, on the Captain's return with his men to their district headquarters at Castle Menzies at Weem later that day, his father asked one of the soldiers "Has my son seized upon any of his unfortunate friends?" When told that they had all escaped, he pulled off his bonnet and with uplifted hands, exclaimed, "May God Almighty make me thankful for this mercy! My unfortunate son (unfortunate in being employed on such a duty) has not been the means of bringing these honorable men to the scaffold."

On a later occasion, Robertson of Faskally was secretly living in a farmhouse at Aldour near the east end of Pitlochry when he was warned that soldiers were approaching to catch him. He just had time to escape by creeping down the burn and climbing into an old oak tree. He remained hiding until the search was over and afterwards escaped to France. This fine example of an Atholl oak, called the ‘Robertson Oak' is still growing on the grounds of the Blair Atholl Distillery and is now estimated to be over 500 years old.

Not all involvements with the government troops quartered in Atholl were as successful. James Robertson of Invervack was surprised one day and slain by troops after a gallant defense during which he killed two of his assailants.

The story of how Prince Charles avoided capture as he was pursued through Scotland is well known. For five months he eluded his pursuers even with a price of 30 thousand pounds on his head. Finally, with the help of Flora Macdonald, he was able to escape ‘over the water' to France in September 1746.

In June 1747, The Government passed an act of Indemnity granting a pardon with certain exceptions, to all persons who had been engaged in the rebellion. Of the 80 persons so named, three, Robertson of Strowan, Robertson of Faskally and Robertson of Blairfetty were specifically excluded. For a first offence of carry a weapon, the fine was 15 pounds. Conviction for a second offense could result in imprisonment for 6 months or transport for seven years tone of the English colonies.

Many of the clan fled Atholl and also escaped to safer countries. Donald Robertson of Woodsheal, although wounded, had managed to return home but then escaped to France where he joined the Scots Brigade as a Captain in the French army. He did eventually return home in 1772 where he died peacefully in 1775.

Struan stayed in Atholl and did whatever he could to help his clansmen. Whenever threatened by Capture from Government troops at Carie, Struan would melt into the remote areas of the Black Wood of Rannoch on the southern shore of Loch Rannoch and hide until the danger was over. On April 18, 1749, Struan, our ‘Poet Chief' died in his house at Carie and the age of 81. The funeral procession from Carie went eighteen miles to the Struan Kirk where he was buried. Despite the edict against him, over 2,000 persons of all ranks attended his funeral service. With his death, an era of clan history ended.