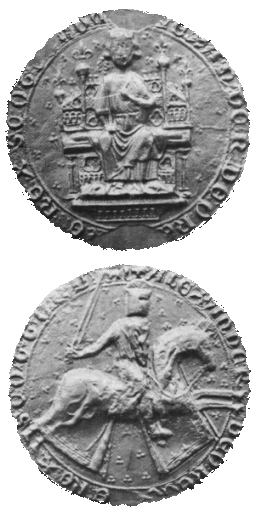 On his father’s death in July 1249, eight year old Alexander was crowned at Scone. During his minority, rival Scottish factions vied for control of this government. In June 1250, Queen Margaret, wife of King Malcolm Canmore was canonized as a saint by the Catholic Church and this was seen as a good sign for his reign. Ten year old Alexander married King Henry III’s eldest daughter Margaret on December 26, 1251.

On attaining his majority in 1259, Alexander III set himself the task of completing his father’s goal of adding the Western Isles to the kingdom. He began negotiations with King Hakon of Norway. When negotiations failed, Alexander sent a force to attack the Isle of Skye. In response King Hakon IV brought a great fleet to Scotland and sailed up the Firth of Clyde. As discussions on a treaty dragged on, a gale drove Hakon’s fleet aground on the beach at Largs which resulted in the October 1263 Battle of Largs. The Norwegian defeat (really a draw) led to the eventual transfer in July 1266 of the Hebrides and the Isle of Man to Scotland by diplomacy with King Magnus (Hakon’s successor) in the Treaty of Perth along with the Scottish payment of a 4,000 marks settlement.

In 1268-1270, David of Strathbogie the ninth Earl of Atholl (known as the Crusader Earl) raised a force of Athollmen and joined the second crusade of King Louis IX of France against the infidels. During the siege of Tunis, many of the Scottish crusaders including the Earl died of the plague in August 1270. Conan’s son Ewen and grandson Angus may have watch the departure of the Earl and his men from Atholl, but there is no record of their participation. Included in the English host was Robert de Bruce, the elder lord of Annandale and his son, Robert de Bruce. On their return from the Holy Land in 1273, the younger Robert married the young widow Marjorie, countess of Carrick and in her right became the earl of Carrick. Their first son, born on July 11, 1274 was named Robert. We know him as King Robert the Bruce.

On King Henry III’s death in 1272, they journeyed to England for the coronation of the Queen’s brother, Edward I. In 1275, Alexander’s wife died leaving three children. Their daughter Margaret had married King Erik II of Norway in 1281. Unfortunately, the two sons predeceased their father. David died in childhood in 1281 and Alexander died at the age of twenty in 1284. On son Alexander’s death, the succession was now in danger, as the only heir was Margaret’s infant daughter Margaret.

Ewen of Glenerochie was married to Maria and he died prior to October 1284. In 1282, Ewen granted a charter to the monks of Coupar Angus Abbey for his lands of Calziebrochan to be held by the monks for his daughters and their husbands. The Glenerochie estate passed to his nearest heir-male. According to tanistry this could have been a son, brother or male cousin relation. Paton in his book states that Ewen "according to tradition, had several sons, by the eldest of whom (Angus) he was succeeded." Paton goes on to state that "Angus, who obtained a crown charter of several lands in Perthshire was succeeded by his son Andrew, designed ‘de Atholia’ of whom nothing further is known." The name of Angus’s wife is unknown.

In March 1286, Alexander held a council meeting at Edinburgh Castle and decided after dinner, to return to Kinghorn on the north side of the Firth of Forth where the Queen was in residence. On a dark and stormy night, Alexander headed home and along the way his horse stumbled on the cliff path and Alexander fell to his death on the rocks below.

Under the system of primogeniture, the only heir was his granddaughter Margaret of Norway who had been born in April 1283 and was only three years old on Alexander’s death. Six Guardians were appointed to govern the kingdom during her minority. John, tenth Earl of Atholl was one of the nobles who acknowledged Margaret as Alexander’s heir after her birth.

By the Treaty of Salisbury in 1289 and the Treaty of Birgham in July 1290 between King Edward I of England and these Guardians, it was agreed that Margaret should marry King Edward’s heir. Again fate intervened. During the ship voyage from Norway to Scotland in May 1290, Margaret became sick and died. Her death ended the dynasty of the Royal House of Dunkeld. It also began the search for a successor from the various claimants to the throne with King Edward I acting as kingmaker and led to the wars of independence from England.

Postscript: The name of Angus’s wife is not known. My conjecture is that for Angus’s son Andrew to have gained the ‘de Atholia’ designation to his name, Angus must have married someone with a valid claim as a member of the earldom of Atholl family and this must have added extensive lands to his Glenerochie inheritance. Could this wife have been Lora, half-sister to Patrick the sixth Earl of Atholl? She did dispute the claim of her aunt Fernelith’s descendant (David of Strathbogie, ninth earl and her cousin) to the earldom. Would she have done this if she did not have an heir of her own? Andrew’s son is known to be Duncan of Atholia, name chief of our clan.