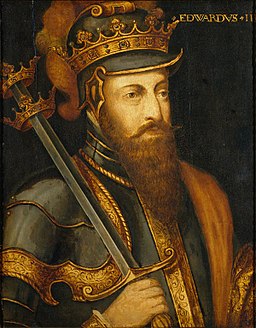 On the death of Robert the Bruce in 1329, the feud between the royal houses of Bruce and Baliol was renewed. Bruce’s young son, King David II and Edward Baliol, son of former King John Baliol, were the leaders of the two rival houses.

Backed by King Edward III, Baliol landed in Fife in 1332 and defeated the Earl of Mar at the battle of Dupplin. Edward Baliol was then crowned at Scone as England’s vassal king. In 1333, Edward III’s army at the battle of Halidon Hill, destroyed a Scottish army led by Sir Archibald Douglas which was trying to raise the English siege of Berwick.

Patriot leaders led by among others, Robert, the High Steward of Scotland and Sir Andrew Moray, reverted back to guerrilla warfare, avoided pitched battles and kept up the armed struggle. As king, Baliol called a parliament in 1334 to discuss a solution to the problem of the disinherited nobles resulting from the Treaty of Northampton in 1328. A provision in that treaty stated that no one could possess lands in Scotland unless he resided there and swore allegiance to only the Scottish crown. This was to eliminate dual loyalty from the nobility having estates in both England and Scotland. David, eleventh Earl of Atholl had refused to do this and lose his newly restored English estates, so his Scottish titles and estates had been forfeited to the crown. Baliol restored David’s titles and possessions.

David Earl of Atholl was made Governor of Scotland by Baliol and King Edward III and during the minority of King David II, accepted command of English troops to harry supporters of the Bruce royal house. He did this to regain his father’s English estates which were lost when his father (Earl John) had fought at the battle of Methven in 1306 and been arrested and executed for high treason by Edward I along with two of King Robert’s younger brothers in 1308. Even more traitorous to the Bruce family, this turncoat’s sister Isobel was the wife of Edward Bruce. The last offence of Earl David was the siege of Kildrummy Castle in 1335, where Robert the Bruce’s sister had taken refuge. Her husband, Sir Andrew Moray led a force of 1,500 men to relieve the siege and Earl David was killed during the fierce battle.

On hearing of his governor’s death, King Edward III set out for Scotland with an English army to punish and waste the countryside as he tried to capture King David’s leading supporters. He commandeered Blair Castle in 1336 for his headquarters during his "stay" in Atholl. Kinclaven castle near Dunkeld was recaptured from the English in 1336 and demolished by Moray’s troops so it couldn’t be reoccupied by the English. After the English withdrew, the earldom of Atholl was bestowed in 1336 by King David II on Sir John Campbell, second son of Sir Neil Campbell of Lochow and his wife Lady Mary Bruce, sister of King Robert the Bruce. Sir Neil built the now ruined Moulin castle above Pitlochry.

It wasn’t until 1337 and the outbreak of the Hundred Years’ War between France and England that Scotland was finally able to clear out the English invaders along with Baliol’s supporters. With England’s attention diverted to protect its French possessions and lay siege to the city of Calais, King David II returned home from France where he had previously been sent for safety and reclaimed the Scottish throne.

On August 26, 1346, the battle of Crecy was the greatest of Edward III’s victories over the French. Two months later King David II led a Scottish army into northern England in response to Phillip of France’s request to honor the "Auld Alliance" and open a second front against England. Expecting the north of England to be defenseless with the main English forces fighting in France, David mustered a host of 12,000 men at Perth including Duncan (our first chief) and his oldest son Robert (2nd chief) with their clansmen. Unfortunately, the Scottish army was soundly defeated at Neville’s Cross near Durham in Yorkshire and David II captured on October 17, 1346.

Duncan and Robert were also taken prisoner and held as hostages in England. Duncan died some time around 1355 and was buried at Dull. King David was release from English captivity twelve years later. In thanks for their service, King David granted a new charter to Robert, eldest son of Duncan of Atholl, under the Great Seal at Perth on May 24, 1362.

Upon the death of David II in 1371, the crown passed to his nephew, Robert the High Steward, as Robert II, the first king of the House of Stewart.