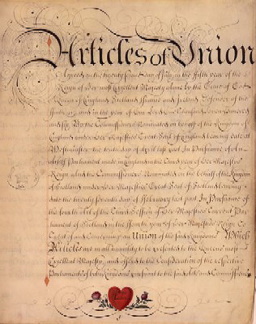 After the battle of Killiecrankie and subsequent activities in 1689, our chief had to flee to France and his estates were confiscated. Struan served with distinction in the French army until Queen Anne granted him a pardon and he was able to return home in 1703.

On the death of King William III of England on March 8, 1702, Anne, the younger sister of his deceased wife (Queen Mary II) became Queen of England. Mary and Anne were the daughters of King James VII and II of England who had died in September 1701. Unfortunately, all of Queen Anne's seventeen children had predeceased her, so according to the Act of Settlement passed in 1701, on her death the crown would pass to the protestant children of Electress Sophia of Hanover, the granddaughter of King James VI and I of England.

On King James' death, the Pope and King Louis XIV of France (September 1701) had recognized his catholic son, Prince James Francis Edward Stewart, as King James VIII and III of England. With France supporting Queen Anne's brother, by May of 1702 the two countries were fighting on opposite sides in the War of the Spanish Succession.

Scotland's Parliament was not happy to accept the Act of Settlement, and responded by passing the Act of Security of 1704, which would not accept the Electress of Hanover unless freedoms of trade, religion and government were guaranteed. England responded with the Aliens Act which demanded Scotland's agreement to the accession of the Electress and the stoppage of all trade between the two countries if Scotland didn't.

Our 13th chief, Alexander, was implicated in what became known as the ‘Queensberry Plot' in 1703. The Duke of Queensberry was one of the Royal Commissioners and was intriguing with Simon Fraser (Lord Lovat) who was the Marquis of Atholl's enemy to get Queen Anne to name her brother Prince James as her successor. Atholl was appointed a member of Queen Anne's Privy Council and Lord Privy Seal in 1702. Atholl informed Queen Anne of the plot and proved his innocence. In 1703 Queen Anne created him the first duke of Atholl in recognition of his services to England. Queensberry was not reappointed as a Royal Commissioner. In July 1705, the Duke of Argyll as the Queen's new high commissioner complained to Queen Anne that twenty Scottish commissioner votes for the Union had been lost by not purchasing them.

In April 1706, 31 Scottish and 31 English commissioners met in London to resolve the political issues and hammer out a solution acceptable to both countries. After long debates, accompanied by riots, lubricated with bribes and fears of loss of commerce the proposed Act of Union was accepted by Scotland's Parliament. It passed the English Parliament and became law on May 1, 1707. The Act of Union merged the two parliaments into one, retained their own separate legal systems, and accepted a common system of coinage, weight and measures. It allowed unrestricted free trade between both countries, Europe and to England's colonial markets. The lyrics of a popular Jacobite song summed it up, "We are bought and sold for English gold".

The Duke of Atholl was opposed to the decisions of the Scottish commissioners in favor of the union with England and in 1706 mustered the whole manpower of Atholl at Blair Atholl to join him. All the Perthshire clans gathered under their chiefs and led by the Duke around 7,000 warriors marched toward Perth to join up with the followers of his wife's father, the Duke of Hamilton and other noblemen. These ‘allies' had second thoughts and did not meet him at the rendezvous. The Duke, being unsupported, disbanded his Athollmen and ordered a return home.

On June 8, 1714, Electress Sophia of Hanover died. Two months later Queen Anne died and in accordance with the Act of Settlement, the eldest son of the Electress, Prince George of Hanover became King George I of England.

After seven years, support for the Union in Scotland remained weak as continued poverty and new taxes had not brought the promised prosperity to Scotland. In 1713, Argyll and Lord Seafield submitted a motion to repeal the Act of Union to the combined House of Lords. It was defeated by only four votes. This helped set the stage for the failed Jacobite "Rising" of 1715 to put Queen Anne's brother, Prince James Francis Edward on the throne.

Struan and five hundred clansmen joined the Earl of Mar at the inconclusive battle of Sheriffmuir in November 1715 against government forces led by the Duke of Argyll. But the "Rising" failed and once again Struan had to flee Scotland and return to France until his sister Margaret went to London and gained a pardon for her brother from King George I. Struan, the unrepentant Jacobite, was allowed to return home in 1725.