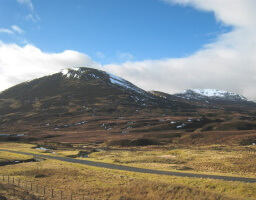 King Charles I of England was executed in London by order of Parliament in January 1649. His son, King Charles II, was crowned King of Scotland, but his attempt to regain his English throne from the Parliamentary government of Oliver Cromwell ended in defeat in September 1651 at the battle of Worcester. William Cunningham, Earl of Glencairn was one of the royalist leaders in Scotland and in early 1653 raised a highland army in Scotland to restore King Charles to the English throne. This attempt is known as the "Glencairn Rising" (1653-1654). To quell this rebellion, Cromwell’s forces invaded Scotland.

At this time, our teenage chief was Alexander (12th chief) son of Alexander (11th chief) who had died in 1636. His uncle Donald was appointed his guardian and was known as the "Tutor of Strowan". Donald had led our clansmen in support of Montrose’s efforts to keep King Charles I on the English throne in 1644-1645. In 1653 the English army entered Atholl and established garrisons at Blair and Grantully castles. Our chief’s castle at Invervack was burned down.

In April 1654, General Monk returned to England from the continental wars in Holland. The English Parliamentary forces in Scotland were now commanded by General Monk with support from Campbell of Argyll’s militia. Colonel Morgan commanded the English cavalry.

Glencairn came to Rannoch to raise the MacGregor and Donnachaidh clans in support of the Royalist cause. Young Alexander sent around the "fiery cross" in the spring of 1654 and our clansmen gathered at Fea Corrie (a secluded gathering place in Glenerochy (north of Loch Rannoch) to prepare for excursions outside of the clan area) and marched north to join the MacGregors near a farm known as Annat. The joined clans continued north and met up with Major General Middleton’s cavalry and infantry at Loch Garry. There had been an earlier quarrel between Middleton who had been given command of all Royalist troops by King Charles and Glencairn who had been waging a guerrilla campaign in the highlands. This led to Glencairn withdrawing his support from Middleton’s army and leaving the army with divided loyalties. Middleton eventually proceeded northward up the old North Road to the Drumochter Pass which leads into Badenoch with a force numbering around 2,000.

On the evening of July 19, 1654, the Royalist army (consisting of about 1,200 foot and 800 cavalry) became separated as the infantry followed the cavalry at a slower pace up through the pass. Unfortunately the Royalist cavalry was surprised by a sudden attack by Colonel Morgan’s English cavalry and put to flight. The ensuing panic upon seeing their fleeing cavalry racing past them left the infantry unsupported and they in turn broke ranks and fled into the mountains upon seeing the approaching English cavalry. Fortunately, clan casualties were very light as only a Captain Robertson was killed. About 300 of the Royalist cavalry were reported captured.

Middleton, although wounded, also managed to escape into the surrounding mountains but was unable to rally a sufficient force to continue the Royalist rebellion. In September 1654, Glencairn surrendered to General Monk. In early 1655, Middleton escaped Scotland and rejoined King Charles II at Cologne. That ended the Rising.

Postscript: In writing the above, I learned that the Annat rendezvous site for where the MacGregors and Robertsons joined forces was an early pre-Christian religious site named for a pagan goddess of victory. Could they possibly have gathered there to make an offering before proceeding north?