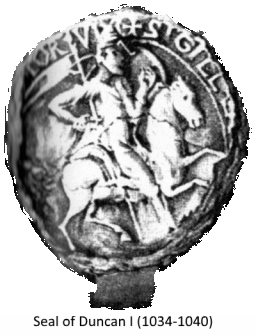 On the death of King Malcolm II in 1034, his grandson Duncan became King of Scots. King Duncan I was the first king of the new Royal House of Dunkeld. Duncan was the son of Malcolm II’s daughter Bethoc and Crinan, the hereditary secular Abbot of Dunkeld and Mormaer of the Pictish kingdom of Atholl.

Celtic succession was decided by tanistry. Under this system, any mature male of the royal kindred was eligible for kingship. Unfortunately, the warring ambitions of royal kinsmen often led to recurring bloodshed. Thus, we had King Duncan slain in battle during 1040 by his cousin Macbeth. Macbeth ruled for seventeen years until 1057. Macbeth also killed Duncan’s father Crinan in a battle at Dunkeld in 1045 when Crinan attempted to put his grandson Malcolm on the throne. When Malcolm arrived back in Scotland with an English army, he slew Macbeth and then later his son Lulach and ruled from 1058-1093 as Malcolm III (Canmore).

Then events became more complicated. Malcolm Canmore had two sons from his first marriage (Duncan and Malcolm) and six sons from his second marriage to Princess Margaret of England (later Saint Margaret). The dynastic struggle began after Malcolm Canmore and his eldest son from his second marriage (Edward) were killed at the battle of Alnwick in November 1093. Duncan, eldest son of the first marriage claimed the throne as Duncan II and ruled for six months from May until he was killed in November 1094.

At the age of about 60, Donald Ban, brother of Malcolm Canmore claimed the throne as King Donald III and co-ruled with his acknowledged heir young nephew Edmund (second son from second marriage) for three years (1095-1097). The third son, Ethelred, had been made the Abbot of Dunkeld as it was the custom of the celtic church to choose its abbots from the founder’s kin just as his great-grandfather Crinan had been abbot.

Edgar, fourth son from Malcolm Canmore’s second marriage with the support of King Henry of England, came north with an English army and deposed the co-rulers and was crowned as King Edgar in the autumn of 1097. Edmund was allowed to become a monk while Donald was captured in 1099, blinded and imprisoned for the rest of his life. From King Edgar onward, royal succession was decided by primogeniture.

The following articles provide a general overview of events during the reigns of these kings beginning with King Edgar in 1097. The Royal House of Dunkeld ended with the death of Alexander III’s daughter Margaret, the Maid of Norway, in 1290. Woven within these articles are known facts (mainly witnessed charters) about the ancestors of our chiefly line through the three celtic earls of Atholl.

KINGS OF THE ROYAL HOUSE OF DUNKELD