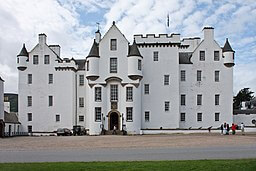 In early February 1646, 1,200 government troops led by Sir Andrew Agnew marched into Atholl and established his command center at Blair Castle. He garrisoned men on most of the rebel estates for the dual purpose of keeping an eye on the inhabitants and forcing these estates to feed his men. Mrs. Robertson of Blairfetty managed to smuggle a letter to her husband stating that she and her people were in danger of starvation having been forced to provide provisions to 60 members of the Campbell militia for over a month.

On receiving this letter, Lord George Murray ordered a battalion of the Atholl Brigade commanded by Lord Nairn to form up on March 16th and commence a march in twilight from Inverness toward Atholl. Passing through Dalwhinnie in Badenoch on his way south, Cluny MacPherson and 300 of his men joined the march. Lord Murray had also received reports that the Duke of Cumberland had established about thirty military posts in Atholl, consisting of some of the fortified private homes of the gentlemen in his command – among others, Robertson of Blairfetty, Lude and Faskally. These had been garrisoned by small detachments of the Hanoverian army from their headquarters at Blair Castle. The government troops consisted of the 21st regiment of Scotch Fusiliers, Sir Agnew's regiment and a battalion of the much loved Campbell militia.

Lord Murray considered it of the utmost importance to deliver his home district from the pillaging and oppressions resulting from this invasion force and prevailed on Prince Charles to allow this expedition while the Jacobite army was encamped near Inverness.

Arriving at Dalnaspidal, opposite Lochgarry, prior to 3 am on March 17th, he divided his men into small parties and assigned each a particular outpost to surprise and attack, directing them after having accomplished their mission to return to the Bridge of Bruar before the break of day.

In the meantime, word of the Athollmen being in the vicinity reached Sir Agnew, governor of Blair Castle and in command of the Atholl garrison. Sir Agnew sallied forth from Blair Castle at the head of 500 men from the Royal North British Fusiliers and proceeded in the direction of Bruar, only two miles west. Lord Murray was waiting at this rendezvous point with only about 25 men and some elderly gentlemen from the local area when he received news of Sir Agnew's approach. Some of his men recommended that they retreat from Bruar since resistance would be impossible against so large a force. Lord Murray is reported to have said that "No, if we leave this place of rendezvous, our parties, as they return from discharging the duty entrusted to them, will be liable to be surprised by the enemy. This must not be. I will rather try what can be done to impose upon Sir Agnew's caution by fictitious display of strength."

Lord Murray's plan was rapidly devised and executed. He placed his remaining men in a continuous line behind a dyke which gave the appearance of an extended and formidable front. Fortunately, he had the pipers from Lord Nairn's Atholl battalion plus the Clan Macpherson pipers with him. These he ordered to strike up lively pibrochs and the colors to be elevated as soon as the Government forces came into view. As Sir Agnew and his forces approached Bruar just prior to dawn, the bagpipers began to play and the remaining men brandished their broadswords and yelled out orders for their nonexistent men to form up for an immediate attack. The ruse worked and Sir Agnew, believing that he was about to be attacked by a superior force and afraid that another force of highlanders might also attack the castle while he was gone, promptly marched his men back to defend Blair Castle. Lord Murray continued to await the return of his detachments, all of whom returned reporting success. The surprised militia garrisons had surrendered after barely firing a shot. His men had captured 300 prisoners with no loss of life. These prisoners were herded north and left at Ruthven.

As soon as three to four hundred of his men had returned, Lord Murray was determined to follow up his success by laying siege to Blair Castle, and capture his older brother's home before succor could arrive from the Duke of Cumberland, encamped at Perth. With this goal in mind, he established a blockade around the castle and ordered his men to fire on any person showing himself on the battlements or in the windows. The younger officers under Sir Agnew's command enjoyed playing jokes upon their stiff old commander. Stuffing one of Sir Agnew's old coats with straw and placing it in a turret window of the castle with a spyglass in hand, it soon became a target for the best deer stalkers in Atholl and Badenoch. At some point, Sir Agnew became curious as to why that particular turret was drawing so constant a fire from the besiegers. He soon discovered the trick that was being played on him and being insensible to a jest of any kind, ranted and raved, then threatened arrest and prosecution of the perpetrators once he found them out.

Another rather amusing anecdote concerning the siege is related in the memoirs of an Ensign Melville, who served under Sir Agnew at the siege. Lord Murray had sent a summons to the castle requiring the garrison to surrender. The errand was undertaken by a young maid named Molly from McGlashan's Inn in Blair where Sir Agnew's younger officers had been frequent visitors before the siege. She was admitted to the castle and she insisted that the summons be given to Sir Agnew. Finally, a timid lieutenant was prevailed upon to deliver the summons and Sir Agnew exploded. After a volley of epithets against Lord Murray, he threatened to shoot through the head any other messengers bringing such a message to him. Molly, the serving maid, retreated in safety to the old church at Blair where she recounted her story to Lord Murray, Cluny Macpherson, Lord Nairn and some Robertson chieftains and they were "highly diverted by her report."

The siege of Blair Castle lasted until the 31st of March. By that time the garrison was on the point of surrendering due to lack of supplies even though the Earl of Crawford, (David Lindsay) at the head of a large body of Hessian troops was marching from Perth to break the siege. Having received recall orders from the Prince, Lord Murray was compelled to raise the siege and begin his retreat toward Inverness to rejoin the Prince's army.

Postscript: None of our clan histories mention Alexander, our 13th chief, involvement in the activities described above. His home at Carie on the southern shore of Loch Rannoch was remote from Blair Castle. Alexander would have been aware of the Hanoverian troops in the area and that they might want to arrest him. While some of his chieftains and men returned and departed with Lord Murray, most of our clansmen were still with the Jacobite army near Inverness. Even to visit with his friend Cluny MacPherson during the short raid would have been unwise. With so few clansmen left in Atholl to protect him, it was better for our 78 year old Jacobite chief to remain at home. Two weeks later, the Jacobite cause died at Culloden Moor and few of our clansmen came home.