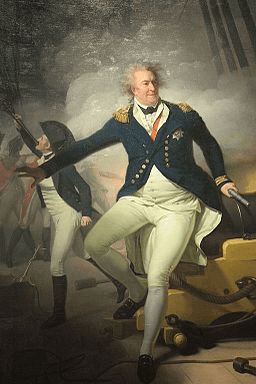 Adam Duncan was born in Dundee on July 1, 1731, to a family that had long been active in the city's affairs. His father, grandfather, and great-grandfather (all named Alexander) had all been Provosts. He entered the Royal Navy in 1746, and his first assignment was to a sloop that patrolled the Western Islands during the Jacobite Rebellion. He saw much active duty during the next sixteen years, watching General Braddock's army land in Virginia in 1755. He received the only wound of his career in an expedition to Senegal in 1762. On this occasion he led a storming party ashore against the Morro Castle while armed only with a heavy stick. Having reached the rank of Captain at age 30, he lacked the seniority to remain on the active list in peacetime. He took part in two expeditions to Gibraltar during the American Revolution, but had to leave active service again when his ship was assigned to the West Indies.

Duncan became a Rear Admiral in 1787 and a vice Admiral in 1793. In 1795 he was given command of a newly organized North Sea fleet. The armies of Revolutionary France had just overrun the Netherlands, and the small but efficient Dutch navy was now a British enemy.

In April 1797, the sailors of the Channel Fleet refused to sail in protest against poor food, brutal discipline, and salaries that had not changed in more than a century. The mutinies spread from Spithead to the Nore in May. Admiral Duncan, who at 6'4" literally stood head and shoulders above the crowd, maintained discipline aboard his flagship Venerable by force of personality. Aboard the Adamant, he picked up a would-be mutineer by the collar and literally held him up to ridicule. At the beginning of June, Duncan had only these two ships to block the Dutch naval base at the Texel. He told his crew that after defeating the Dutch, they would return to the Nore and reduce the mutineers to obedience, adding that the water was shallow enough that even if the Venerable were sunk, his flag would still be flying. In the meantime, the two ships signaled constantly, as though the rest of the fleet was waiting over the horizon. Help began to arrive six days later, and the Dutch fleet did not come out until October. By then the mutinies were over and the opportunity for an invasion of England had passed.

Duncan's fleet was taking on supplies at Yarmouth when word came that the Dutch were at sea. The two fleets met on the afternoon of October 11, 1797 off the village of Camperdown. Realizing that if he took time to form a line of battle, the Dutch fleet would escape, Duncan attacked in two columns, anticipating the tactics that Nelson would use later at Trafalgar.

Both fleets had sixteen ships of the line, and the British prevailed only after three and a half hours of desperate fighting. Nine Dutch ships of the line and two frigates were captured. Two of the prizes sank afterwards, and the rest were fit only for firewood. The British fleet lost 1,140 men. The defeated Admiral de Winter, who matched Duncan's size and stature, was amazed that they had both escaped injury.

Admiral Duncan returned to a hero's welcome. He was inducted into the House of Lords as Baron Duncan of Lundie and Viscount Duncan of Camperdown. The festivities concluded with a royal procession and a thanksgiving service at St. Paul's Cathedral.

In 1799, British and Russian forces landed in Holland. They soon withdrew, but not before what remained of the Dutch fleet surrendered to Admiral Duncan. He retired from the Navy in 1800, and spent his last years near Dundee. In 1804, he offered his services to the Admiralty, but was turned down in view of his age and health. He died on August 4, 1804 on his way back from that interview. His tomb, which was damaged during the Blitz, may be seen in the west end of the crypt of St. Paul's Cathedral.