Until 1969, the Roman Catholic Church listed 350 saints. After a series of meetings known as Vatican II, the calendar of saints was reduced to 173 by Pope Paul VI. Among the remaining 173 are missionary saints, martyrs, defenders of the faith, and others of equal rank. The Pope divided those into three orders of saints. The remaining saints were either "a glory on the mountaintop, a gleam on a hillside, or a faint light in a valley."

Our own clan history has a connection to two Roman Catholic saints and to one who was never canonized. King Malcolm III (Canmore) was the grandson of Crinan, the Abbot of Dunkeld. Malcolm’s younger brother Maelmare was the celtic earl of Atholl and through his descendants, our chiefly line derives. 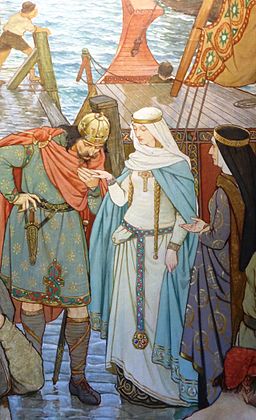 The first recognized saint was Princess Margaret of the Saxon kingdom of Wessex. She was the sister of Edgar Atheling, the uncrowned Anglo-Saxon King of England. After the Norman conquest of England, they fled England in 1068 and a storm forced them to land in Scotland. At that time, Scotland was ruled by King Malcolm III, son of King Duncan I and head of the Royal House of Dunkeld. At this time, King Malcolm was a widower with a son Duncan (later King Duncan II).

Margaret married King Malcolm III in 1070 at the castle of Dunfermline and they had 8 children. There were six sons (the three youngest subsequently ruled as kings of Scotland) and two daughters from this marriage.

Margaret died on November 16, 1093, three days after the death of her husband and eldest son Edward at the battle to recapture Alnwick castle in Northumberland from the Norman King William Rufus. She was canonized in 1250 by Pope Innocent IV. Margaret’s feast day is the same as her day of death.

Margaret’s eldest daughter Edith (she was crowned as Matilda and known as "Good Queen Maud") married King Henry I of England (younger brother of King William Rufus) in 1100 and died in 1118. Due to her devotion to the poor and to the founding of many religious houses and two leper hospitals in England there was an attempt to have her sainthood recognized though she was never canonized. Her daughter Matilda born in 1102 married and became the Holy Roman Empress on her marriage to Holy Roman Emperor Henry V. On King Henry I’s death in 1135 the Empress sought the English throne but was succeeded by his nephew Stephen of Blois, beginning the English civil war which didn’t end till 1154 on Stephen’s death and Matilda’s son being crowned King Henry II, the first of the Plantagenet kings. 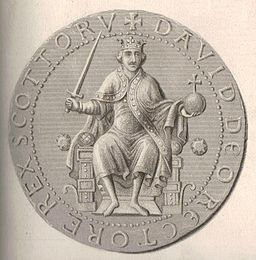 Margaret’s youngest son David (as the Prince of Cumbria) married Matilda the daughter of the English earl of Northampton and Huntingdon around 1113. David reluctantly became King David I of Scotland in 1124 on his older brother’s (King Alexander I) death. On the death of his brother-in-law, King Henry I in 1135, a civil war began between Matilda and her cousin Stephen who challenged her right to the English throne. David supported his late sister’s daughter, the Empress Matilda, but devoted most of his attention to Scotland’s interests. He established royal burghs in Edinburgh, Berwick, Roxburgh, Stirling, Dunfermline and Perth to reorganize the administration of the kingdom and increase the royal tax revenue through foreign trade.

David was one of medieval Scotland’s greatest monastic patrons and was canonized for his work in establishing convents and monasteries throughout Scotland. He founded an abbey at Holyrood (later Holyrood Palace) in Edinburgh. It was named for a relic, ‘the Black Rood’, brought to Scotland by his mother. It was believed to contain a fragment of the cross on which Christ was crucified.

St. Margaret’s Chapel was built in honor of his mother in Edinburgh castle reputedly on the spot where she died. His saint’s day is May 24 as he died on that date in 1153 and was buried in Dunfermline Abbey founded by his parents.