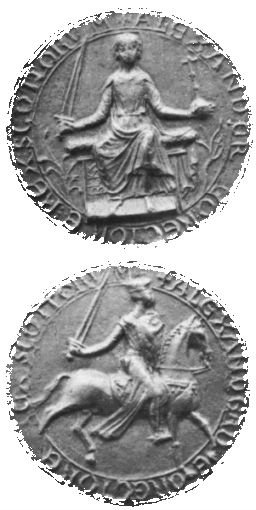 Alexander came to the throne on the death of his father, King William the Lion at the age of sixteen. In 1215, two rebellious Moray clans MacUilleim and MacHeths led by Donald Ban, a great-grandson of King Duncan, broke out into revolt against King Alexander II, whose father had died in December 1214. Forces loyal to the royal House of Dunkeld led by a powerful celtic lord, Farquhar MacTaggart, speedily quelled the rebellion. MacTaggart was the lay abbot of the monastery of Applecross. After the June 1215 victory, Alexander knighted him for beheading the rebel leaders.

After the death of King John of England in October 1216 the treaty of Kingston between the ten-year-old Henry III of England, King Louis of France and Alexander insured peace between the three countries. This peace was further strengthened by Alexander’s marriage to Henry’s older sister Joan in June 1221.

In 1222 the semi-independent district of Argyll rebelled against Alexander’s plans to absorb it into the kingdom. This rebellion was ruthlessly suppressed with assistance from MacTaggart’s army. This successful campaign probably included Athollmen led by Thomas, 5th Earl of Atholl. Thomas had become earl in 1220 through his marriage to Earl Henry’s granddaughter Isobel. Earl Henry’s natural son, Conan, could not inherit the earldom and so it passed in turn to the husbands of his half-brother’s daughters. Conan is an ancestor of our chiefly line and received from his father, lands in Glenerochy that were not tied to the earldom. Conan made a grant around 1216 to the abbey of Cupar for their use of his woods. This grant was confirmed by his son Ewen.

King Alexander II awarded lands to the Clan MacIvor in 1222 in return for their military services rendered during the conquest of Argyll. Some of these MacIvors, from Glenlyon in Perthshire, then migrated and held these lands as a distinct and separate branch of their clan in Argyll.

In 1223 a bloody revolt in Caithness was suppressed. That same year MacTaggart was rewarded and made the new Mormaer or Earl of Ross. Another royal expedition in 1225 was successful in quelling a second northern rebellion in Moray.

With Scotland’s southern border with England secure, Alexander turned his attention to acquiring the semi-independent district of Galloway. On the death of Alan, lord of Galloway in 1234, his three daughters and an illegitimate son contested the lordship. Alexander supported the husbands of the three daughters and his forces suppressed a revolt in 1235 and successfully crushed an invasion attempt the following year by its exiled leaders. Alexander divided Galloway between the three daughters thus bringing an end to Galloway’s independent existence.

In 1235, Alexander founded a chapel in the cathedral church at Elgin where masses were sung for his soul of his ancestor, King Duncan I. Sometime between 1235 and 1242 Conan granted a charter to the Abbey of Lindores for certain sums to be paid from his lands "for the weel of the souls of himself, his wife, his ancestors and his successors". Among the witnesses to this charter were his son Ewan, Hath son of Gilbrid and Madith de Clonyn. Quite possibly, these two men might have been the husbands of his two daughters as the estate of Clonyn bordered Ewan’s lands.

In 1237 Alexander and Henry III concluded the Treaty of York which defined the boundaries between the two kingdoms and Alexander rescinded Scottish claims to Northumbria and Cumbria.

In 1242, Patrick, sixth Earl of Atholl had been treacherously killed by the Bisset family. He was the last heir-male of Isobel, granddaughter of Earl Henry of Atholl and her celtic husband Thomas of Galloway. Patrick’s half-sister Lora on his death was said to have disputed her aunt Fernelith’s claim to the earldom to no avail. In the Melrose Chronicles Lora is identified as the countess of Atholl and was buried at Melrose Abbey in 1269. Fernelith, the other granddaughter, had married an Anglo-Norman, Sir David de Hastings. Their male descendants continued as Anglo-Norman earls of Atholl until 1314 when the 11th earl revolted against King Robert the Bruce and was deprived of his office and estates in Scotland.

King Alexander’s wife Joan died in March 1238 while on a visit to England and Alexander married his second wife, Marie de Coucy, the daughter of a French lord in May 1239. They had one son in September 1241, the future Alexander III and last king from the House of Dunkeld.

In July 1249 Alexander II led a military expedition to the Hebrides to bring these islands clearly under the crown of Scotland and not Norway. Alexander fell ill near Oban on his way to enforce this claim and died. He was buried at Melrose Abbey. Gaining control of the Hebrides was left to his son to successfully complete.