For Samuel Chester Reid's contributions to the Navy and later to the whole country, four U.S. Navy ships have been given the name USS Reid in his honor, three destroyers DD-21, DD-292, DD-369, and a guided-missile frigate (FFG-30).

The first USS Reid (DD-21) was a US Navy Smith-class destroyer during World War I, in service from 1909 to 1919. She was the first ship of four US Naval vessels named for Samuel Chester Reid.

Her hull was laid down by the Bath Iron Works, Bath, Maine on 3 August 1908, launched on 17 August 1909, christened by Miss Linda Andrews, and commissioned on 3 December 1909, under the temporary command of Ensign V. V. Woodward.

During the pre-World War I period she was assigned to the Atlantic Torpedo Flotilla. The Reid operated along the east coast, primarily engaged in training exercises and drills until the U.S. entered World War I. During World War I, the Reid saw service with the Southern Patrol Force, operating out of Key West, Florida; Squadron 1, Patrol Force at Boston, Massachusetts patrolling the northeast coast of the United States; and the Destroyer Force doing coastal escort traffic and patrolled the approaches to New York City.

In July 1918 the Reid provided escort and patrol services in the vicinity of the Azores and Brest, France. On the 23 October, she was rammed and damaged above the waterline by the merchant ship W. T. James. Repairs were completed at Brest, and she continued her work without further interruption until the end of the war. During her war service, she made several attacks on submarines, most notably against the UB-55 on 18 March 1918 and the U-86 on 1 July, but she failed to sink either. She was relieved from duty after the Armistice. The Reid decommissioned on 31 July 1919, struck from the Naval Vessel Register on 15 September and sold to the T. A. Scott & Company, New London, Connecticut on 21 November 1919. 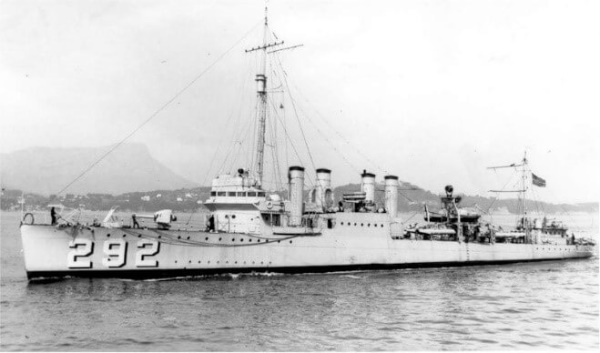 The second USS Reid (DD-292) was a Clemson-class destroyer in the United States Navy following World War I in service from 1919 to 1930.

The hull of the second Reid was laid down by the Bethlehem Shipbuilding Corporation, Squantum, Massachusetts, 9 September 1919; she was launched 15 October 1919 and christened by Mrs. Joseph W. Powell; and commissioned 3 December 1919, under the command of Lieutenant Commander V. D. Chapline.

Assigned to Squadron 3, Atlantic Fleet, the Reid completed shakedown off Cuba in February 1920; participated in battle practice in March; and on 26 April she put into New York City. Underway again on 1 May, she steamed south, touched at Key West, then cruised off the east coast of Mexico until mid-June. By 6 July she was at Newport, Rhode Island, making several runs to New York prior to shifting to Charleston, SC toward the end of September. For almost 3 years she remained on the east coast, operating out of Charleston, NC; Newport, Rhode Island; and Yorktown, Virginia. Such coastal operations were occasionally interrupted for brief periods of inactivity at Charleston, due to cuts in personnel.

In late January 1923 the Reid returned to Guantanamo Bay for winter maneuvers, and in February she continued on to the Panama Canal Zone for battle practice. By the end of March, she was back off Cuba, before returning to Newport and exercises off the east coast. In the winter of 1924, she repeated her Caribbean operations; but, in the spring, headed east for duty in European waters.

On 28 June she arrived at Cherbourg, France, and joined the Light Cruiser Squadron. During that month she visited various Baltic and North Sea ports, conducting airplane patrols off Iceland in August, and in September she steamed into the Mediterranean. She remained in the western Mediterranean into November, and then proceeded, via Crete and Greece, to Turkey. During the next 2 months, she patrolled the eastern basin, calling at ports in the Levant and Egypt, before resuming operations off France and Tunisia.

The Reid departed the Mediterranean in early May, and, after calls at French and British ports, crossed the Atlantic, arriving at New York on 16 July. At the end of August, she had resumed operations out of Newport and in September she again steamed south for exercises in the Caribbean. In December she underwent overhaul at Philadelphia before returning to the Caribbean.

Attached to the Scouting Fleet for the next 4 years, she continued to alternate east coast training cruises with Caribbean and Gulf of Mexico operations. From 24 April to 12 June 1927, she participated in the second Nicaraguan campaign, cruising off that coast, delivering supplies and mail to Marine detachments ashore, and assisting in the collecting of arms from allied forces.

In 1929 Reid was designated for inactivation. She completed her last cruise at Philadelphia 30 August 1929 and was decommissioned there 1 May 1930. Struck from the Naval list 22 October 1930, she was sold for scrap to the Boston Iron & Metal Company, Baltimore, Maryland, 17 January 1931.

This Reid's hull was laid down 25 June 1934 by Federal Shipbuilding and Drydock Company, Kearny, New Jersey; she was launched 11 January 1936; commissioned by Mrs. Beatrice Reid Power; and commissioned 2 November 1936, under the command of Captain Robert B. Carney.

From 1937 into 1941, Reid participated in training and fleet maneuvers in the Atlantic and Pacific. During the attack on Pearl Harbor, Reid's gunners fired at the Japanese planes and downed one of them. After the attack, Reid patrolled off the Hawaiian Islands, Palmyra Atoll, and Johnston Island during December. In January 1942, she escorted a convoy to San Francisco, California. Returning to Hawaii for more patrol duty, she later steamed to Midway Island, and then twice more escorted convoys from Pearl Harbor to San Francisco.

Departing Pearl Harbor on 22 May 1942, Reid steamed north to bombard Japanese positions on Kiska Island, Alaska on 7 August 1942. She supported landings at Adak, Alaska on 30 August and sank by gunfire the Japanese submarine Ro-61. After transferring five Japanese prisoners to Dutch Harbor, Alaska, she returned to Pearl Harbor before departing on 7 October to escort Task Group 15.1 to Pago Pago, American Samoa. She departed Pago Pago on 23 October for Pearl Harbor, arriving there on 30 October 1942. She left for San Francisco on 4 November 1942, arriving on 12 November 1942. She remained at Mare Island Navy Yard for overhaul until 6 December 1942, when she departed with Task Group 2.17 for New Caledonia. When she called in with the Task group to Nadi, Fiji and she was transferred to the Task group to Suva, Fiji. Departing Suva Harbor, Fiji Islands on Christmas Day 1942, she escorted Army troops to Guadalcanal before guarding a convoy to Espiritu Santo, New Hebrides. In January 1943, she bombarded several enemy locations on Guadalcanal.

After patrols in the Solomon Islands, the Reid provided radar information and fighter direction for landings at Lae, New Guinea. While supporting landings at Finschhafen, New Guinea, she downed two enemy planes on 22 September 1943.

In Reid's final two weeks in the waters around Leyte, the crew was able to sleep only an hour or two at a time. They were called to battle stations an average of 10 times a day. While escorting reinforcements for Ormoc Bay near Surigao Straits on 11 December 1944, the Reid destroyed seven Japanese planes, while protecting a re-supply force of amphibious craft bound for Ormoc Bay Leyte. Twelve enemy planes had approached the convoy with the Reid being the nearest ship to the oncoming planes. Planes 1 and 2 were shot down by the 5-inch battery, and plane 3 exploded about 500 yards (460 m) off the starboard beam. Plane 4 hooked a wing on the starboard rigging, crashing at the waterline. Its bomb exploded, causing considerable damage forward. Plane 5 strafed the starboard side and crashed on the port bow. Plane 6 strafed the bridge from the port side and crashed off the starboard bow. Planes 5 and 6 apparently had no bombs or their bombs were duds. Plane 7 came in from astern, strafed Reid and crashed into the port quarter. Its bomb exploded in the aft magazine, blowing the ship apart. All this action took place in less than a minute.

The ship was mortally wounded but still doing 20 knots. As the stern opened up, she rolled violently, then lay over on her starboard side and dove to the bottom at 600 fathoms. Her death was over in less than two minutes, and 103 crewmen went down with the ship. The survivors were strafed in the water by Japanese planes before being rescued. The Reid received seven battle stars for World War II service. 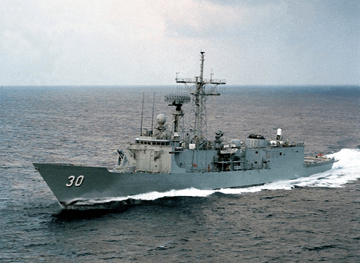 The fourth USS Reid (FFG-30) was the twenty-second ship of the Oliver Hazard Perry-class of guided-missile frigates commissioned.

Ordered from Todd Pacific Shipyards, Los Angeles Division, San Pedro, California on 23 January 1978 as part of the FY78 program, Reid was laid down on 8 October 1980, launched on 27 June 1981, christened by Mrs. William C. Abhau, her daughter Miss Elliot Abhau assisting, Mrs. Abhau was the great-great granddaughter of Sailing Master Reid for whom the ship was named. The Reid was commissioned on 19 February 1983.

This fourth Reid's unofficial nickname ‘Reidski’, used during the 1980s, came into use as the Reid found herself, more often than not, playing on the side of the "orange" or enemy team during fleet exercises.

On 18 August 1990, the Reid is credited with having fired the first shots of Operation Desert Shield when she fired across the bow of an Iraqi tanker who had refused to change course when ordered.

Decommissioned and struck from the US Naval rolls on 25 September 1998, she was transferred to the Turkish Navy on 5 January 1999 and renamed as that nation's TCG Gelibolu (F 493).