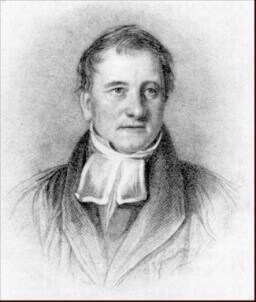 Located about a mile south of the 724 road between the old and interesting city of Dumfries and the town of Annan, lies a tiny village named Ruthwell.

One of Ruthwell's claims to fame lies at the east end of the village street in a white double cottage. A sign on the wood fence announces that visitors are welcome to visit the Dr. Duncan Savings Bank Museum, which occupies one side of the building. The other side provides living quarters for the custodians who delight in showing visitors around the museum, explaining the exhibits that line the walls and telling the story of this "first" saving bank and of its founder.

The museum was officially declared open to the public by the Trustees Savings Banks Association on October 4, 1974 to celebrate the 200th anniversary of the Reverend Dr. Henry Duncan's birth.

The story of the Ruthwell Bank starts when Rev. Duncan arrived about the years 1798-99 as the new minister to the village church. At that time, the village had a population of about 1,200 persons. As he worked with his flock, he recognized that few had any worldly goods to ensure their personal security, especially during their elderly years. Reverend Duncan initially established a "Friendly Society" as a step toward serving this need.

In 1810, he established his saving bank in the local Friendly Society Hall based upon firm business principles. Its rules and regulations were fair but very strict:

The bank was successful from the beginning. Similar style banks soon opened nearly. In January 1815, Reverend Duncan and his brother, the Reverend Thomas Tudor Duncan founded the Dumfries Bank which is still in existence and operating today.

Being a pastor and founding banks were not the only accomplishments of Dr. Henry Duncan. Having discovered a broken 7th century runic cross in the Ruthwell parish churchyard, he spent time, energy and money to have the cross repaired, reassembled and erected again. He was the editor for some seven years of the Dumfries and Galloway Courier newspaper. He was also a minor artist, geologist and poet.