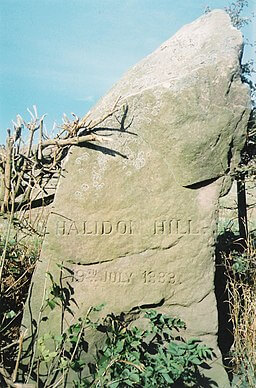 In 1332 during an English-Scots uneasy peace, Edward Balliol with the support of King Edward III of England sailed with 88 ships and landed in Fife to reclaim the Scottish throne his father had abdicated in 1296. By sailing to Fife, he bypassed the Scottish defenders stationed along the border. Marching to Perth, Balliol won a decisive victory at Dupplin Moor over the Earl of Mar (a nephew of Robert the Bruce and Regent of Scotland for Bruce’s son) on August 11, 1332. This battle demonstrated the effectiveness of the English longbow against the traditional Scottish long spears and Scots losses were heavy. It was reported that Scottish bodies were piled to the height of a 15 foot spear while English losses were light. With Mar dead, Balliol had himself crowned at Scone several weeks later. Dupplin Moor was the first battle in what became known as the second Scottish War of Independence.

Sir Archibald Douglas, the newly appointed Regent and guardian of the eight year old King David II (son of Robert the Bruce), led a surprise attack on Balliol’s camp near the end of that year and swept Balliol from the country "with one leg booted and the other bare".

The puppet-king returned in March 1333 with King Edward III leading an English army and laid siege to the border town of Berwick-upon-Tweed. Berwick’s defenders had agreed to surrender unless they were relieved by July 20, 1333. Sir Archibald Douglas raised an army to relieve the siege. Edward III established the English army in three divisions upon Halidon Hill, a 600 foot high summit about two miles southwest of Berwick. This was the perfect vantage point which gave command over all approaches to Berwick. The only means of attack for the Scots was to work their way through swampy ground before clambering up the hillside. As the Scottish spearmen attempted this, the English archers again riddled the Scots with arrows. By the end of that black day, July 19th, Sir Archibald, six earls, seventy barons, five hundred knights and an unknown number of spearmen were dead, while English dead numbered fourteen. Berwick surrendered the next day.

Both battles were fought by Scottish spearmen trained to fight in schiltron formations. While the earl of Atholl, Sir John Campbell died at Berwick, fortunately Duncan of Atholl (our 1st chief) did not bring our clansmen (not being trained to fight in this fashion) to participate in either battle.

Balliol rode north to Perth and declared himself king once more. King David II fled to safety in France as the guest of King Phillip VI. Edward III returned to England and turned his attention toward France and thus began the Hundred Years War. David II didn’t return to Scotland until 1341 after the final flight of Edward Balliol in 1336.