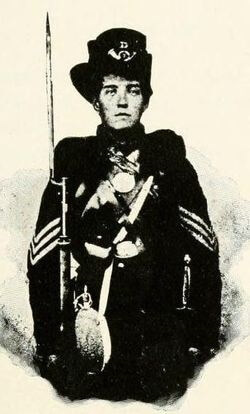 During September 1864 while a sergeant assigned to the skirmish lines during the siege of Richmond, Virginia, he displayed great personal courage and extreme gallantry in the face of the enemy during engagements with the Confederate forces defending Richmond.

Sergeant Robie’s Medal of Honor citation read: "The President of the United States of America, in the name of Congress, takes pleasure in presenting the Medal of Honor to Sergeant George Frank Robie, United States Army, for extraordinary heroism on September, 1864, while serving with Company D, 7th New Hampshire Infantry, in action at Richmond Virginia, for gallantry on the skirmish line.

He later attained the rank of First Lieutenant before his discharge. His Medal of Honor was awarded on June 12, 1883.

George Robie died on June 5, 1891 and was buried in the New City Cemetery in Galveston, Texas.