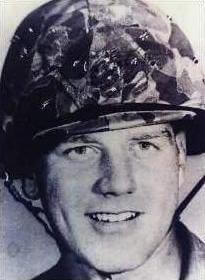 Robinson’s Medal of Honor (Posthumous) award citation read: "For conspicuous gallantry and intrepidity in action at the risk of his life above and beyond the call of duty. Company C was engaged in fierce combat with a Viet Cong battalion. Despite the heavy fire, Sgt. Robinson moved among the men of his fire team, and placing them in advantageous positions. Enemy snipers located in nearby trees were inflicting heavy casualties on forward elements of St. Robinson’s unit. Upon locating the enemy sniper whose fire was taking the heaviest toll, he took a grenade launcher and eliminated the sniper. Seeing a medic hit while administering aid to a wounded sergeant in front of his position and aware that now the two wounded men were at the mercy of the enemy, he charged through a withering hail of fire and dragged his comrades to safety, where he rendered first aid and saved their lives. As the battle continued and casualties mounted, Sgt. Robinson moved about under intense fire to collect from the wounded their weapons and ammunition and redistributed them to able-bodied soldiers. Adding his fire to that of his men, he assisted in eliminating a major enemy threat. Seeing another wounded comrade in front of his position, Sgt. Robinson again defied the enemy’s fire to affect a rescue. In so doing he was himself wounded in the shoulder and leg. Despite his painful wounds, he dragged the soldier to shelter and saved his live by administering first aid. While patching his own wounds, he spotted an enemy machine gun which had inflicted a number of casualties on the American Force. His rifle ammunition expended, he seized two grenades and, in an act of unsurpassed heroism, charged toward the entrenched enemy weapon. Hit again in the leg, this time with a tracer round which set fire to his clothing, Sgt. Robinson ripped the burning clothing from his body and staggered indomitably through the enemy fire, now concentrated solely on him, to within grenade range of the enemy Machine gun position. Sustaining two additional chest wounds, he marshaled his fleeting physical strength and hurled the two grenades, thus destroying the enemy gun position, as he fell dead upon the battlefield. His magnificent display of leadership and bravery saved several lives and inspired his soldiers to defeat the numerically superior enemy force. Sgt. Robinson’s conspicuous gallantry and intrepidity, at the cost of his life, are in keeping with the finest traditions of the U.S. Army and reflect great credit upon the 1st Infantry Division and the U.S. Armed Forces."

Postscript: Both of my sons attended Robinson Secondary School in Fairfax, Virginia.