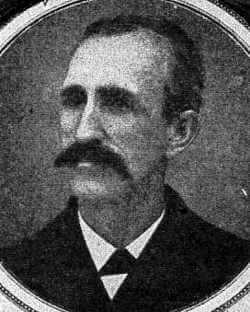 Elbridge Robinson was born on January 7, 1844 in Morgan County, Ohio. He enlisted in the 122nd Ohio Infantry Regiment of the Union Army during the Civil War. He married Maretta (Reichart) Robinson and they had one daughter.

The Second Battle of Winchester was fought on June 13-15, 1863. It did not end with a victory for the Union army under General Robert Milroy. The majority of the Union soldiers surrendered to the Confederate forces. Robinson accompanied John Patterson, Musician for his regiment, went out between the lines on Bower’s Hill during a pause in the fighting and rescued Price Worthing, Drummer, who had been shot in both legs and was unable to return to the Union line. Unwilling to see their comrade die from lack of medical care, they exposed themselves to enemy fire. Patterson was wounded during the rescue and later captured. Both men were awarded the Medal of Honor.

Robinson’s Medal of Honor citation read: "The President of the United States of America, in the name of Congress, takes pleasure in presenting the Medal of Honor to Private Elbridge Robinson, U.S. Army, for extraordinary heroism on 14 June 1863, while serving with Company C, 122d Ohio Infantry, in action at Winchester, Virginia With one companion, Private Robinson voluntarily went in front of the Union Line, under a heavy fire from the enemy, and carried back a helpless, wounded comrade, thus saving him from death or capture."

The award for both men was not approved until April 5, 1898.

Robinson died on January 19, 1918 in Vernon, Marion County, Illinois. He was buried in the Patoka Cemetery in Marion County.