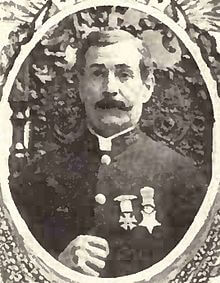 Robbins served as a private in the US 6th Cavalry Regiment fighting during the American Indian Wars. As part of what became known as the Red River War, on April 23, 1875, Robbins and five other soldiers were ordered to sneak up behind a band of Cheyenne warriors and attack them from the rear at Sappa Creek, Kansas. Eight Medals of Honor were awarded for this engagement on November 16, 1876. The Cheyenne war party was led by Little Bull and the fight is now known as the ‘Massacre at Cheyenne Hole’.

Private Robbins’ Medal of Honor award citation read: "With five other men he waded in mud and water up the creek to a position directly behind an entrenched Cheyenne position, who were using natural bank pits to good advantage against the main column. This surprise attack from the enemy rear broke their resistance."

Marcus Robbins died on June 21, 1924 at his daughter’s home in Pittsfield, Massachusetts and is buried in the Pittsfield Cemetery.