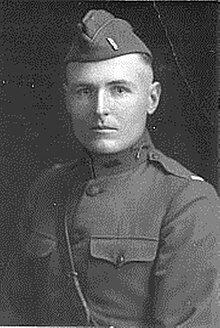 George Seanor Robb was born on May 18, 1887 in Assaria, Kansas. He graduated from Park University in Parkville, Missouri in 1912.

Robb’s Medal of Honor citation read: "The President of the United States of America, in the name of Congress, takes pleasure in presenting the Medal of Honor to First Lieutenant (Infantry) George Seanor Robb, U.S. Army, for extraordinary heroism on September 29 & 30, 1918, while serving with 369th Infantry, 93rd Division, in action at Sechault, France. While leading his platoon in the assault, First Lieutenant Robb was severely wounded by machinegun fire, but rather than go to the rear for proper treatment he remained with his platoon until ordered to the dressing station by his commanding officer. Returning within 45 minutes, he remained on duty throughout the entire night, inspecting his lines and establishing outposts. Early the next morning he was again wounded, once again displaying his remarkable devotion to duty by remaining in command of his platoon. Later the same day a bursting shell added two more wounds, the same shell killing his commanding officer and two officers of his company. He then assumed command of the company and organized its position in the trenches. Displaying wonderful courage and tenacity at the critical times, he was the only officer of his battalion who advanced beyond the town, and by clearing machinegun and sniping posts contributed largely to the aid of his battalion in holding their objective. His example of bravery and fortitude and his eagerness to continue with his mission despite severe wounds set before the enlisted men of his command a most wonderful standard of morale and self-sacrifice."

Robb later was appointed by Governor Alfred Landon to the post of Kansas State Auditor in 1935 and was subsequently elected twelve times before his retirement in 1960. The George S. Robb Centre for the Study of the Great War at Park University was named in his honor.

Robb died on May 14, 1972 in Topeka, Kansas and was buried in the Gypsum Hill Cemetery in Salina, Kansas.