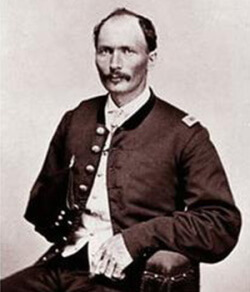 Reed served as a sergeant in Company K, 2nd Minnesota Infantry on September 19, 1863 at Chickamauga, Georgia and as an officer on November 15, 1863 at Missionary Ridge, Tennessee. For his bravery in both actions he was awarded the Medal of Honor. During action at Missionary Ridge, he was wounded and his right arm was amputated.

Reed’s Medal of Honor citation read: "While in arrest at Chickamauga, Georgia, left his place in the rear and voluntarily went to the line of battle, secured a rifle, and fought gallantly during the two day battle; was released from arrest in recognition of his bravery. At Missionary Ridge, Reed commanded his company and gallantly led it, being among the first to enter the enemy’s works; was severely wounded, losing an arm, but declined a discharge and remained in active service to the end of the war."

Interestingly, Sergeant Reed had been put under arrest for writing a letter to a newspaper which had been critical of the food shortages of the army and was confined for it. When the battle of Chickamauga began, he either escaped or persuaded his guards to let him return to his company to fight alongside his men.

Before being mustered out in July 1865 he had risen to the rank of first lieutenant. He returned home, raised a family and started a bank. He was elected as a Republican in the Minnesota legislature in 1869-70 and from 1878 to 1889 was the publisher of the Glencoe Enterprise newspaper.

Reed died at home on January 21, 1917 and was buried at the Glencoe City Cemetery, Glencoe, Minnesota.