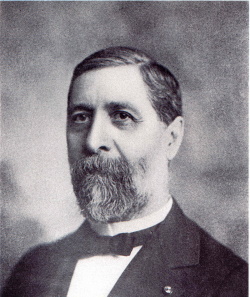 Roberts Stoddart Robertson was born on April 16, 1939 in North Argyle, New York to Nicholas and Martha Robertson. His father’s profession as Justice of the peace motivated him to choose the law as a profession and he was admitted to the New York bar in November 1860.

Robertson joined the Union Army in Company K, 93rd New York Volunteer Infantry in Albany October 1861. Also known as the Morgan Rifles, the regiment was in twenty two campaigns during the Civil War as part of the Army of the Potomac.

Robertson’s Medal of Honor citation read: "The President of the United States of America, in the name of Congress, takes pleasure in presenting the Medal of Honor to First Lieutenant Robert Stoddart Robertson, United States Army for extraordinary heroism on 8 May 1864, while serving with Company K, 93d New York Infantry, in action at Corbins Bridge, Virginia. While acting as aide-de-camp to a general officer, seeing a regiment break to the rear, First Lieutenant Robertson seized its colors, rode with them to the front in the face of the advancing enemy, and rallied the retreating regiment."

After discharge as a Brevet Captain in June 1865, he married Elizabeth Miller on July 19, 1965. He became a lawyer in Washington, D.C. then moved to Fort Wayne, Indiana. Robertson ran for office and was elected Lieutenant Governor of Indiana in 1886.

Robertson received the Medal of Honor on July 26, 1897 from the Secretary of War under President McKinley.

Robertson died in 1936 and is buried in Lindenwood Cemetery, Fort Wayne, Indiana.