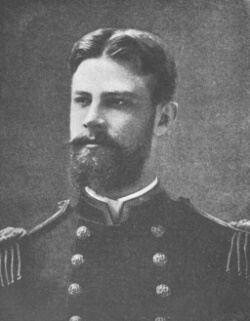 Richmond Pearson Hobson was born on August 17, 1870 in Greensboro, Alabama. His parents were James M. Hobson and Sarah Pearson. He graduated first in his class from the U.S. Naval Academy in 1889, but was ostracized by his fellow midshipman for his total abstinence from alcohol and tobacco. In 1891 he was appointed an assistant Naval Constructor and served in various yards and facilities. Before the Spanish-American War, he served a tour of duty as an instructor at the Naval Academy.

In the early days of that war, he arrived off Santiago in June 1898. Given command of the collier USS Merrimac, he attempted to sink that ship in the port channel to bottle up the Spanish squadron. On June 3, under heavy fire which disabled the steering gear of the collier, Hobson did sink the Merrimac, but was unable to fully block the channel. Hobson, along with his six men, was captured by Admiral Cervara of the Spanish fleet. While a prisoner of war in Cuba, he became a hero in the American press for his bravery in volunteering for what the press said was a suicide mission.

Hobson was released during a prisoner exchange on July 6, 1898 and was deluged with speaking invitations on his safe return. He had dinner with President William McKinley and then traveled west by train to San Francisco and the Philippines.

In 1902, he was promoted to Captain and resigned from active duty in 1903. In 1905 Hobson married Grizelda Houston Hull and they had one son. During his subsequent career as a Democratic U.S. Representative from Alabama (1907-1915) he was a firm advocate of naval expansion.

On April 29, 1933 he was awarded the Medal of Honor by President Franklin D. Roosevelt at the White House for his attempt to block the channel. He was the only Navy officer to receive the Medal of Honor during the Spanish-American War.

Hobson’s Medal of Honor citation read: "In connection with the sinking of the U.S.S. Merrimac at the entrance to the fortified harbor of Santiago de Cuba, 3 June 1898. Despite persistent fire from the enemy fleet and fortifications on shore, Lieutenant Hobson distinguished himself by extraordinary courage and carried out this operation at the risk of his own personal safety."

In 1934, by a special act of the U.S. Congress, Hobson was advanced to the rank of Rear Admiral and placed on the retired list. He died on March 16, 1937 in New York City and is interred in Arlington National Cemetery, Arlington, Virginia. The destroyer USS Hobson (DD-464), commissioned in January 1942, was named in his honor.