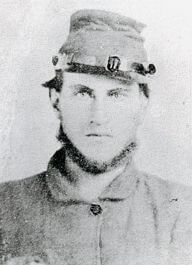 Private Samuel Robertson was killed on June 18, 1862 near Atlanta after a Union raid into Georgia to capture a railroad train and destroy the rail line and bridges connecting the cities of Atlanta, Georgia and Chattanooga, Tennessee. Civilian scout James Andrews and his volunteers penetrated nearly 200 miles behind the Confederate lines, commandeered a locomotive named "The General", and did vital damage to the Western and Atlantic Railroad before being caught. Pursued by Confederate forces northward, the Raiders cut the telegraph lines to prevent word getting passed to any blocking forces. Samuel Robertson was among the eight executed by hanging as spies after capture. As one of ‘Andrews Raiders’, he was posthumously awarded the Medal of Honor in September 1863.

Robertson’s Medal of Honor (Posthumous) citation read: "The President of the United States of America, in the name of Congress, takes pride in presenting the Medal of Honor (Posthumously) to Private Samuel Robertson, United States Army, for extraordinary heroism on April 1862, while serving with Company G, 21st Ohio Infantry, in action during the Andrews’ Raid in Georgia. Private Robertson was one of the 19 of 22 men (including two civilians) who by direction of General Mitchell (or Buell) penetrated nearly 200 miles south into enemy territory and captured a railroad train at Big Shanty, Georgia, in an attempt to destroy the bridges and tracks between Chattanooga and Atlanta."

Samuel Robertson is buried in the Chattanooga National Cemetery in Chattanooga, Tennessee.

Postscript: In 1956, the Disney Studios released the movie "The Great Locomotive Chase" to herald the exploits of the Andrews Raid.