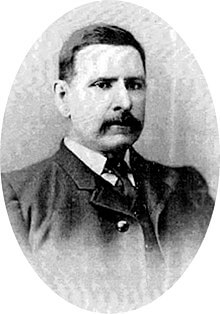 Reid joined the Union Army in Pottsville, Pennsylvania and was in Company G of the 48th Pennsylvania Infantry Regiment. The Second Battle of Petersburg was fought June 15-18, 1864 when General Grant decided to capture Petersburg and cut off supplies and reinforcements from reaching General Lee’s defensive lines around Richmond.

The 48th Pennsylvania Infantry was entrenched before Petersburg, Virginia as part of the 9th Corps of the Army of the Potomac. In a surprise attack on the Confederate defensive positions, Reid captured three Confederate soldiers making for the rear carrying a stand of colors. When the flags were unfurled, one proved to be that of the 7th New York Heavy Artillery that had been captured the day before. The other belonged to the 44th Tennessee Infantry.

Reid’s Medal of Honor citation read: "The President of the United States of America, in the name of Congress, takes pleasure in presenting the Medal of Honor to Private Robert Alexander Reid, United States Army for extraordinary heroism on 17 June 1864, while serving with Company G, 48th Pennsylvania Infantry, in action at Petersburg, Virginia, for capture of flag of 44th Tennessee Infantry (Confederate States of America)."

Robert A. Reid died on April 25, 1929 in Pottsville, Pennsylvania and was buried in the Odd Fellows Cemetery in Pottsville.