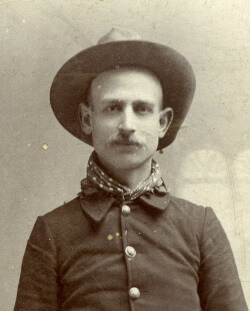 Marcus William Robertson was born on February 12, 1870 in Flintville, Wisconsin.

Robertson enlisted as a private in Company B of the 2nd Oregon Volunteer Infantry Regiment at Hood River, Oregon in May 1898. The regiment was formed after the battleship USS Maine exploded in Havana Harbor, Cuba on February 15, 1898. The regiment was mustered in on May 8, 1898 and was sent San Francisco en route to the Philippines during the Philippine-American War. It became part of 1st Division, 8th Army Corps. On February 4, 1899, Philippine insurgents attacked American troops in Manila. Robertson was chosen to be in Young’s Scouts, an advanced guard established to engage in search and destroy missions against these insurgents. After many successful engagements, on May 16, 1899, 21 members of Young’s scouts engaged the enemy at San Isidro where they routed the enemy insurgents.

Robertson’s Medal of Honor citation read: "With 21 other scouts charged across a burning bridge, under heavy fire, and completely routed 600 of the enemy who were entrenched in a strongly fortified position."

On June 14, 1899, Robertson’s regiment sailed for home and received a hero’s welcome on arrival in San Francisco on July 13, 1899. He was later promoted to Stable Sergeant and served in France during World War I.

Robertson died on May 24, 1948 and is buried in Pine Grove Cemetery, Hood River, Oregon.