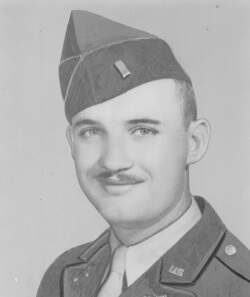 James Edward Robinson, Jr. was born on July 10, 1918 in Toledo, Ohio, the son of James E. and Dolores Robinson. During the Great Depression in 1920s, the family moved to Texas and eventually settled in Waco, Texas in 1927. He was married to Vina Robinson and father of daughter Dolores.

He served the Texas National Guard from September 1935 to his discharge on June 1, 1939. From June 2 to March 21, 1942 Robinson was stationed at Fort Sam Houston and rose from private to staff sergeant He graduated from Field Artillery Officer Candidate School in Fort Sill, Oklahoma in May 1943.and was a member of the 63rd Infantry Division, 253rd Regiment, 861st Field Artillery Battalion, Battery A. His unit was deployed to France in January 1945 just before the Battle of the Bulge. On April 6, 1945, Robinson was killed in action near the village of Kressbach, Germany.

First Lieutenant Robinson’s Medal of Honor (Posthumous) citation read: "He was a field artillery forward observer attached to Company A, 253rd infantry, near Untergriesheim, Germany, on 6 April 1945. Eight hours of desperate fighting over open terrain swept by German Machinegun, mortar, and small-arms fire had decimated Company A, robbing it of its commanding officer and most of its key enlisted personnel when 1st Lt. Robinson rallied the 23 remaining uninjured riflemen and a few walking wounded, and, while carrying his heavy radio for communication with American batteries, Led them through intense fire in a charge against the objective. Ten German infantrymen in foxholes threatened to stop the assault, but the gallant leader killed them all at point-blank range with rifle and pistol fire and then pressed on with his men to sweep the area of all resistance. Soon afterward he was ordered to seize the defended town of Kressbach. He went to each of the 19 exhausted survivors with cheering words, instilling in them courage and fortitude, before leading the little band forward once more. In the advance he was seriously wounded in the throat by a shell fragment, but, despite great pain and loss of Blood, he refused medical attention and continued the attack, directing supporting artillery fire even though he was mortally wounded. Only after the town had been taken and he could no longer speak did he leave the command he had inspired in victory and walk nearly 2 miles to an aid station where he died from his wound, By his intrepid leadership 1st Lt. Robinson was directly responsible for Company A’s accomplishing its mission against tremendous odds."

The Medal of Honor was presented to his widow, Vina and their daughter Dolores on December 11, 1945. First Lieutenant Robinson is buried in the National Cemetery at Fort Sam Houston, San Antonio, Texas.