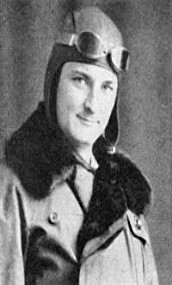 Gunnery Sergeant Robinson’s Medal of Honor citation read: "The President of the United States of America, in the name of Congress, takes pleasure in presenting the Medal of Honor to Gunnery Sergeant Robert Guy Robinson, for extraordinary heroism as observer in the 1st Marine Aviation Force at the front in France. In company with planes from Squadron 218, Royal Air Force, conducting an air raid on 8 October 1918, Gunnery Sergeant Robinson’s plane was attacked by 9 enemy scouts. In the fight which followed, he shot down one of the enemy planes. In a later air raid over Pittham, Belgium, on 14 October 1918, his plane and one other became separated from their formation on account of motor trouble and were attacked by 12 enemy scouts. Acting with conspicuous gallantry and intrepidity in the fight which ensued, Gunnery Sergeant Robinson, after shooting down one of the enemy planes, was struck by a bullet which carried away most of his elbow. At the same time his gun jammed. While his pilot maneuvered for position, he cleared the jam with one hand and returned to the fight. Although his left arm was useless, he fought off the enemy scouts until he collapsed after receiving 2 more bullet wounds, one in the stomach and one in the thigh."