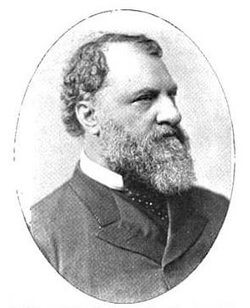 James Alexander Williamson was born on February 8, 1829in Columbia Kentucky.

Williamson’s Medal of Honor citation read: "The president of the United States of America, in the name of Congress, takes pleasure in presenting the Medal of Honor to Colonel James Alexander Williamson, U.S. Army, for extraordinary heroism on 29 December 1862, while serving with 4th Iowa Infantry, in action at Chickasaw Bayou, Mississippi. Colonel Williamson led his regiment against a superior force, strongly entrenched, and held his ground when all support had been withdrawn."

After the war he resumed his practice in Des Moines. He became involved in politics and was instrumental in moving the Iowa state capitol from Iowa City to Des Moines. President Grant appointed him a Commissioner for the General Land Office in Washington, D.C. He became president of a transcontinental railroad for ten years. He then had a law practice in New York, then moved it to Jamestown, Rhode Island were he continued that practice until his death.

Williamson died on September 7, 1902 and was buried in Rock Creek Cemetery, Washington, D.C.