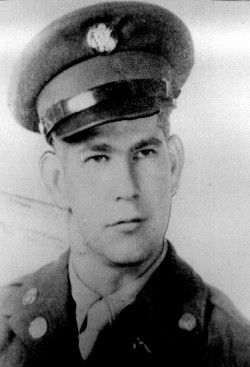 John W. Collier was born on April 3, 1929 in Worthington, Kentucky.

Collier joined the US Army in 1950 and was a corporal in Company C, 1st Battalion, 27th Infantry Regiment, 25th Infantry Division. Collier was killed-in-action during the Pusan Perimeter Offensive on September 19, 1950 and posthumously received the Medal of Honor and Purple Heart on June 24, 1951.

Collier’s Medal of Honor (Posthumous) citation read: "Corporal Collier, Company C, distinguished himself by conspicuous gallantry and intrepidity above and beyond the call of duty in action. While engaged in an assault on a strategic ridge strongly defended by a fanatical enemy, the leading elements of his company encountered intense automatic weapons and grenade fire. Corporal Collier and three comrades volunteered and moved forward to neutralize an enemy machine gun position which was hampering the company’s advance, but they were twice repulsed. On the third attempt, Cpl. Collier, despite heavy enemy fire and grenade barrages, moved to an exposed position ahead of his comrades, assaulted and destroyed the machine gun nest, killing at least four enemy soldiers. As he returned down the rocky, fire-swept hill and joined his squad, an enemy grenade landed in their midst. Shouting a warning to his comrades, he, selflessly and unhesitatingly, threw himself upon the grenade and smothered its explosion with his body. This intrepid action saved his comrades from death or injury. Corporal Collier’s supreme, personal bravery, consummate gallantry, and noble self-sacrifice reflect untold glory upon himself and uphold the honored traditions of the military service."