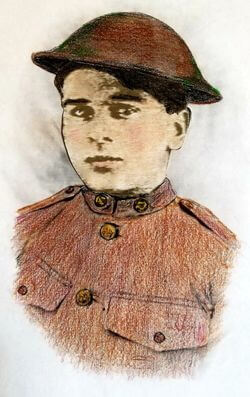 Harold William Roberts was born on October 14, 1895 in San Francisco, California. He was the son of John and Elfreda Roberts. While a boy, his family survived the great San Francisco earthquake of 1906.

Roberts joined the U.S. Army in December 1916 and was originally assigned to the U.S. cavalry and sent to the Philippines. On his return his unit was transported to Hoboken New Jersey by train where they boarded transport ship U.S.S. Aeolus for France. As cavalry was not needed in France, his regiment was merged into the new Tank Corps led by Lieutenant Colonel George S. Patton, Jr. Corporal Roberts was now a driver in Company A, 344th Battalion, Light Tank Corps, American Expeditionary Forces (AEF) under General "Black Jack" Pershing. The battalion was issued 45 French Renault FT17 tanks and trained during the summer of 1918.

The AEF joined a major offensive known as the Meuse-Argonne Offensive on October 4 against the German defensive positions. Five days of rain prior to the offensive made for slow going through water-filled trenches and shell holes. Roberts and his gunner, Sergeant Virgil Morgan, were part of this offensive. Roberts was killed on the first day of this attack and his body was retrieved two days later on October 6, in the Montrebeau Woods.

Roberts’ Medal of Honor (Posthumous) citation read: "Corporal Roberts, a tank driver, was moving his tank into a clump of bushes to afford protection to another tank which had become disables. The tank slid into a shell hole, 10 feet deep, filled with water, and was immediately submerged. Knowing that only 1 of the 2 men in the tank could escape, Corporal Roberts said to the gunner, "Well only one of us can get out, and out you go," whereupon he pushed his companion through the back door of the tank and was himself drowned."

In an interview after the war, Sergeant Morgan related that "The crater we went into was caused by a large caliber shell, and therefore was so deep it was impossible to get out. By keeping the engine running in the reverse was the only way to keep the rear of the tank above water. As it took the continuous care of one man to keep the thing going, only one of us could get out. The back door was the only way to get out as the other doors were buried in mud."

Camp Nacimiento, which was under construction in 1940, was renamed by the War Department ‘Camp Roberts’ on January 1, 1941. It served as a training and placement center during World War II, Korean and Vietnam wars. It currently serves as the home of the California National Guard.

His grave is in the Meuse-Argonne American Cemetery in Romagne, France.