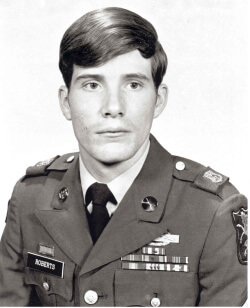 In May 1968, three days after graduation from high school, he enlisted in the U.S. Army. Roberts served in Company B, 1st Battalion, 506th Infantry Regiment, 101st Airborne Division and deployed to the Republic of Vietnam in April 1969. On July 11, 1969 after already being awarded a Silver Star and the Bronze Star, he single-handedly saved the lives of over twenty fellow soldiers on Hill 996 during Operation Montgomery Rendezvous.

Roberts’ Medal of Honor citation read: "For conspicuous gallantry and intrepidity in action at the risk of his life above and beyond the call of duty. Sergeant Roberts distinguished himself while serving as a rifleman in Company B during combat operations. Sgt. Roberts’ platoon was maneuvering along a ridge to attack heavily fortified enemy bunker positions which had pinned down an adjoining friendly company. As the platoon approached the enemy positions, it was suddenly pinned down by heavy automatic weapons and grenade fire from camouflaged enemy fortifications atop the overlooking hill. Seeing his platoon immobilized and in danger of failing in its mission, Sgt. Roberts crawled rapidly toward the closest enemy bunker. With complete disregard for his safety, he leaped to his feet and charged the bunker, firing as he ran. Despite the intense enemy fire directed at him, Sgt. Roberts silenced the 2-man bunker. Without hesitation, Sgt. Roberts continued his 1-man assault on a second bunker. As he neared the second bunker, a burst of enemy fire knocked his rifle from his hands. Sgt. Roberts picked up a rifle dropped by a comrade and continued his assault, silencing the bunker. He continued his charge against a third bunker and destroyed it with well-thrown hand grenades. Although Sgt. Roberts was now cut off from his platoon, he continued his assault against a fourth enemy emplacement. He fought through a heavy hail of fire to join elements of the adjoining company which had been pinned down by the enemy fire. Although continually exposed to hostile fire, he assisted in moving wounded personnel from exposed positions on the hilltop to an evacuation area before returning to his unit. By his gallant and selfless actions, Sgt. Roberts contributed directly to saving the lives of his comrades and served as an inspiration to his fellow solders in the defeat of the enemy force. Sgt. Roberts’s extraordinary heroism in action at the risk of his life are in keeping with the highest traditions of the military service and reflect great credit upon himself, his unit, and the U.S. Army."

Roberts returned to the U.S. in June 1970 after spending 14 months in Vietnam. On March 2, 1971, President Nixon presented the Medal of Honor to Sergeant Roberts at the White House. Returning to civilian life after his first enlistment, Roberts attended the University of Dayton, married and fathered a son and daughter, and became a social worker. He rejoined the Army as a commissioned officer in 1991 and completed various assignments in-country and overseas before retiring as a Colonel on May 18, 2012.

His hometown is Lebanon, Ohio.