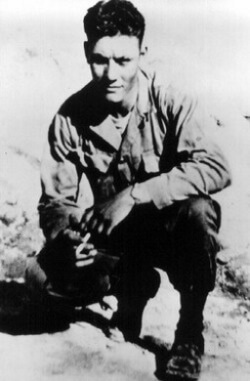 Gilbert George Collier was born on December 30, 1930 in Hunter Arkansas to George H. and Ollie Collier. They had five sons and one daughter.

Collier married Peggy Connelly on May 27, 1950. Collier joined the U.S. Army in 1951 and served in Company F, 2nd Battalion, 223rd Infantry Regiment, 40th Infantry Division. Corporal Collier and his unit were shipped to South Korea. For his actions on July 19-20, 1953 he posthumously earned the last Medal of Honor of the Korean War and was promoted to sergeant. The medal was presented at the Pentagon to his widow on January 12, 1955.

Sergeant Collier’s Medal of Honor (Posthumous) citation read: "Sgt. Collier, a member of Company F, distinguished himself by conspicuous gallantry and indomitable courage above and beyond the call of duty in action against the enemy. Sgt. Collier was pointman and assistant leader of a combat patrol committed to make contact with the enemy. As the patrol moved forward through the darkness, he and his commanding officer slipped and fell from a steep, 60-foot cliff and were injured. Incapacitated by a badly sprained ankle which prevented immediate movement, the officer ordered the patrol to return to the safety of friendly lines. Although suffering from a painful back injury, Sgt. Collier elected to remain with his leader, and before daylight they managed to crawl back up and over the mountainous terrain to the opposite valley where they concealed themselves in the brush until nightfall, then edged toward their company positions. Shortly after leaving the daylight retreat they were ambushed and, in the ensuing fire fight, Sgt. Collier killed 2 hostile soldiers, received painful wounds, and was separated from his companion. Then, ammunition expended, he closed in hand-to-hand combat with 4 attacking hostile infantrymen, killing, wounding, and routing the foe with his bayonet. He was mortally wounded during this action, but made a valiant attempt to reach and assist his leader in a desperate attempt to save his comrade’s life without regard for his own personal safety. Sgt. Collier’s unflinching courage, consummate devotion to duty, and gallant self-sacrifice reflect lasting glory upon himself and uphold the noble traditions of the military service."

When his fellow soldiers later rescued them, Collier, who subsequently died on July 22nd of his wounds, told them with some of his last words, "I realized that my only chance for survival was to stand my ground and fight off the enemy."

Observation Post Collier in the Demilitarized Zone between North and South Korea is named in his honor. Sergeant Collier is buried in the De Witt Cemetery in Arkansas County, Arkansas.