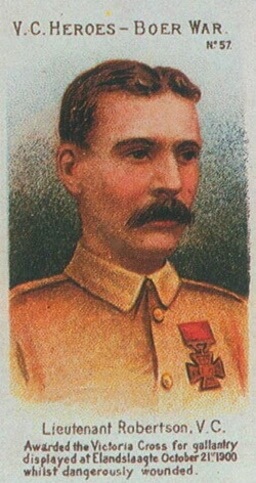 William Robertson was born in Dumfries Scotland to John and Janet Robertson. He enlisted in the Gordon Highlanders in December 1884. First serving in India at the Battle of Elandslaagte on October 21, 1899, in Northern Natal, Lt. General Sir George White VC and Colonel of the Gordon Highlanders was in command of the British forces. The Boers had invaded Natal and occupied the railway station at Elandslaagte on October 19th, cutting communications between the main British forces at Ladysmith and a small detachment at Dundee. British cavalry under Colonel French were sent to recapture the station. Unable to drive off the Boers and needing reinforcements, Colonel Hamilton arrived by train with the 2nd Gordon Highlanders battalion.

The Boers counter-attacked the reinforced British forces and drove them back in confusion. The British rallied and led by Robertson, charged the enemy positions again, killing the Boer commander, General Kock, and many of his men. The remaining Boers mounted their ponies and fled. They were pursued by two squadrons of Lancers and Dragoon Guards. For his gallant actions that day in rallying the Gordons, Regimental Sergeant-Major William Robertson (2nd Gordon) was awarded the Victoria Cross.

Although too old for fighting service in the Great War, he served as a Recruiting Staff Officer in Edinburgh. One of his three sons was killed in action at Beaumont Hamel on the Somme.

This was the first Victoria Cross "For Valour" won by one of our clansmen since it was established in 1856 by Queen Victoria. He received his award from Queen Victoria at Windsor Castle in August 1900. His Victoria Cross is displayed at the National War Museum of Scotland in Edinburgh Castle. He was also the recipient of Commander of the Most Excellent Order of the British Empire.

Robertson retired as a Lieutenant-Colonel and was the first honorary President of our Clan Society.