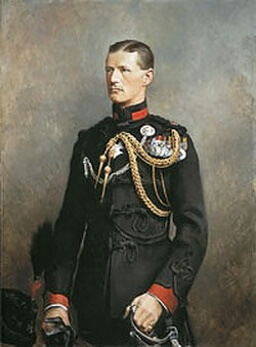 Born in British India, he was the only surviving son of Frederick S. and Nora Roberts. Frederick attended Eton College and after completing his studies, attended the Royal Military College at Sandhurst and was commissioned as a second lieutenant in the Kings Royal Rifle Corps in June 1891.

He participated in the Waziristan Expedition in 1895 to relieve the siege of Chitral in British India and took part in the Nile Expedition in 1898, following which he was promoted to lieutenant. The Rifle Corps was sent to South Africa in 1899 for the Second Boer War. On December 15, 1899 at the Battle of Colenso in Natal, Roberts, with three others, tried to save the guns of the 14th and 66th Batteries of the Royal Field Artillery during which he was badly wounded. The British lost 10 guns and over 1,000 casualties in this defeat by the Boers.

Roberts’ February 1900 citation read: "The Queen has been graciously please to signify Her intention to confer the decoration of the Victoria Cross on the under mentioned Officers and Non-Commissioned Officer, whose claims have been submitted for Her Majesty’s approval, for their conspicuous bravery at the battle of Colenso. At Colenso on 15th December 1899, the detachments serving the guns for the 14th and 66th Batteries, Royal Field Artillery, had all been killed, wounded, or driven from their guns by infantry fire at close range, and the guns were deserted. About 500 yards behind the guns was a donga (a dry stream bed) in which some of the few horses and drivers left alive were sheltered. The intervening space was swept with shell and rifle fire. Captain Congreve, Rifle Brigade, who was in the donga, assisted (Roberts) to hook a team into a limber, went out and assisted to limber up a gun. Being wounded, he took shelter, but seeing Lieutenant Roberts fall, badly wounded, he went out again and brought him in."

Roberts was wounded in three places and two days later died of his wounds. General Buller recommended Roberts for the VC in a dispatch written on December 16th, the day before Roberts died of his wounds. Lieutenant Roberts was the first to win the VC posthumously. In January 1900, his grieving father, Field Marshall Lord Frederick Roberts arrived to take command of all British forces in South Africa against the Boers.

Lieutenant the Honorable F.H.S. Roberts and his father Field Marshall Lord Frederick S. Roberts were one of only three pairs of fathers and sons to ever win the Victoria Cross. His father won it for an action at Khudagani during the Indian Mutiny in 1858. Lieutenant Roberts’ Victoria Cross is displayed at the National Army Museum in Chelsea, England.