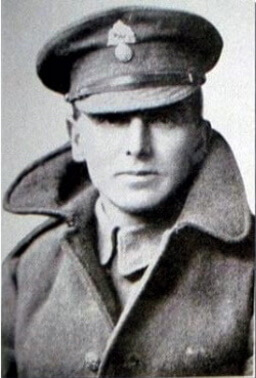 Charles Graham Robertson was born in Dorking, Surrey in 1879.

He first served as a trooper with the Imperial Yeomanry during the Second Boer War (1899-1902) which led to British victory over the Boer Orange Free State and the South African Republic (Transvaal) and their incorporation into British South Africa. On his return to England, he resumed his railway career with the Great Eastern Railway.

In September 1915, Robertson enlisted in the 10th Battalion, Royal Fusiliers and arrived at the Western Front in November. Wounded in April 1917 at the Battle of Arras but he recovered and returned to his battalion in August. On March 8/9, 1918 he was situated to the west of the Polderhoek Chateau in Belgium when his position near Ypres was attacked in what became known as the Kaiser’s Offensive to reach the channel ports.

Lance-Corporal Robertson’s citation stated: "For most conspicuous gallantry and devotion to duty in the repelling of a strong attack by the enemy on our position On realizing that he was being cut off, Robertson sent back two men to get reinforcements, and remained at his post firing his Lewis gun and killing large numbers of the enemy, who were in range on his right. No reinforcements came up, and realizing that he was being completely cut off, he withdrew with the only other survivor of the garrison of the post to a point about ten yards further back where he successfully held his position. Here he again stayed for some considerable time, firing his Lewis gun and inflicting casualties on the enemy. The position was, however, made impossible for him by the heavy hostile bombing and machine-gun fire, so he was forced to again withdraw, and arrived at a defended post. At this post he got on top of the parapet with a comrade, mounted his gun in a shell-hole and continued firing at the enemy, who were pouring across the top of and down an adjacent trench. He had not been firing long when his comrade was killed, and he himself severely wounded. He managed to crawl back, bring his gun with him, but could no longer fire it as he had exhausted all his ammunition. Lance-Corporal Robertson was alone throughout these operations except for the presence of one other man who later was killed. The most determined resistance and fine fight which he put up undoubtedly prevented the enemy from making a more rapid advance. His initiative and resource, and magnificent fighting spirit are worthy of the highest praise."

Robertson was not expected to survive his stomach wound but he recovered and resumed working for the railway until his retirement in 1939. Sergeant Robertson served in the home guard during WW II. His Victoria Cross was presented by his widow Doreen in 1977 to the Royal Fusiliers Museum in the Tower of London where it is now displayed.