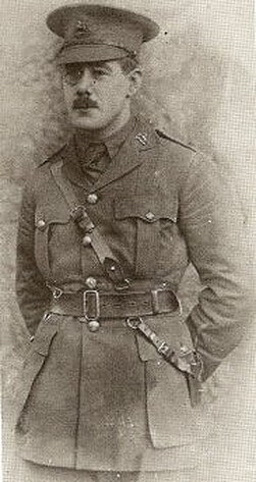 Oswald Reid was born in Johannesburg, South Africa in November 1893, the son of Harry and Alice Gertrude Reid, both pioneer founders of that city. He came to England to complete his education in 1913. On August 14, 1914, ten days after the United Kingdom declared war on Germany he was commissioned as a 2nd Lieutenant in the 4th Battalion, King’s Liverpool Regiment. Twice wounded on the Western front, he was posted to India in 1916 and attached to the 6th Loyal North Lancashire Regiment. In March 1917 the British army was approaching Baghdad and met the last main line of Turkish defense at the Diyalah River. Eventually around 100 men and four officers from the 6th Loyals, led by Captain Reid established a tiny beachhead against fierce Turkish opposition. On the third night of the siege, reinforcements were able to cross on pontoons and relieve the beachhead.

Captain Reid’s citation stated: "For most conspicuous bravery in the face of desperate circumstances. By his dauntless courage and gallant leadership, he was able to consolidate a small post with the advanced troops on the opposite side of a river to the main body after his line of communications had been cut by the sinking of the pontoons. He maintained this position for thirty hours against constant attacks by bombs, machinegun and shell fire, with the full knowledge that repeated attempts at relief had failed, and that his ammunition was all but exhausted. It was greatly due to his tenacity that the passage of the river was effected on the following night. During the operations he was wounded."

He was wounded again and in December 1917, participated in the capture of Baghdad. Later he served with the Allied forces sent to Russia. After the war, he returned home to South Africa and died in October 1920. His Victoria Cross is displayed in Johannesburg, in the South African National Museum of Military History.