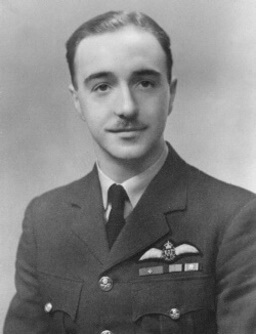 William Reid was born in Glasgow, the son of a blacksmith. He volunteered to join the Royal Air Force and after flight training in Canada, was commissioned in June 1942. In September 1943 he was posted to his squadron and flew seven sorties to various German cities before the raid on Dusseldorf which earned Flight-Lieutenant William Reid his Victoria Cross as a pilot in the RAF Bomber Command.

On the night of November 3, 1943, Reid was serving with the 61 Squadron as captain of a Lancaster bomber on the way to attack a ball bearing factory in Dusseldorf when attacked by a Messerschmitt 110 as his plane crossed the Dutch border. With the plane badly damaged and Reid suffering from various wounds to his head, shoulders and hands, he continued on with the mission and was attacked again by a Focke-Wulf 190 which raked the bomber with gunfire from stem to stern. Delivering his bombs on target, they headed for home under heavy anti-aircraft fire until reaching the North Sea. As the bomber touched down at Shipdham air base, the undercarriage collapse and the plane skidded along the runway for 60 yards before grinding to a halt.

His citation stated: "Wounded in two attacks, without oxygen, suffering severely from cold, his navigator dead, his wireless operator fatally wounded, his aircraft crippled and defenceless, Flight-Lieutenant Reid showed superb courage and leadership in penetrating a further 200 miles into enemy territory to attack one of the most strongly defended targets in Germany, every additional mile increasing the hazards of the long and perilous journey home. This tenacity and devotion to duty were beyond praise."

After recovering from his wounds, Reid was back on duty in January 1944 flying sorties over occupied France. In July 1944 his plane was shot down during an attack on a weapon storage site and he was captured and held at the Luckenwalde PoW camp west of Berlin until freed by American troops in May 1945.

In 1950 he became an agricultural adviser to the MacRobert Trust, which was headed by Lady MacRobert of Douneside, who was an Honorary Vice President of the Clan Society from 1952-54. Reid married in 1952 and was the father of a son and daughter. He died in 2001 and is buried in the Crieff cemetery in Perthshire.