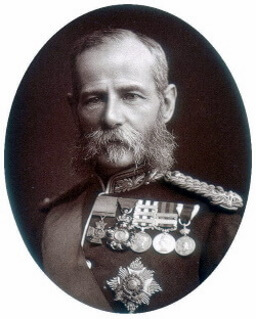 First commissioned into the Bengal Horse Artillery in 1851, Roberts distinguished himself during the suppression of the Indian Mutiny (1857-1858). He won the Victoria Cross for his repeated acts of gallantry at the battle of Khudagani.

He scored the decisive victory of the Second Afghan War on Sept 1, 1880 with the defeat of Ayub Khan near Kandahar. At the end of the campaign in 1880, Lord Roberts addressed the massed King’s Own Scottish Borderers, the Seaforth, and the Gordon regiments. In his final speech to them, "You beat them at Kabul and you have beaten them at Kandahar and now, as you are about to leave the country, you may be assured that the very last troops the Afghans ever want to meet in the field are the Scottish Highlanders and Gurkhas."

In 1883 Lord Roberts was given command of the Madras Army in India and in October 1885 was commander-in-chief of all forces in India. He was a popular hero of the British Empire during its late Victorian zenith and was known as "Bobs" by his men.

In 1895, Lord Roberts was promoted to Field Marshal and made commander-in-chief of Ireland. During this time, he wrote "41 Years in India" (1851-1892) which was published in 1897. After British defeats by the Boers in 1899, reinforcements were sent and Lord Roberts was given command as the Field Marshall of all British forces in South Africa. His scorched earth policies and aggressive military campaigns during 1900 succeeded in capturing the capital of the Orange Free State Republic in March, the city of Johannesburg in May, Pretoria in June, and defeated the Boer commandoes at Bergendal in August. With victory in these major battles the Boers resorted to guerilla warfare and Field Marshall Lord Roberts was recalled to England and turned over command to Lord Kitchener (Earl of Khartoum) for peacekeeping and mopping-up operations and returned to England in November 1900 for promotion to commander-in-chief of the British Army.

Roberts was created a baron in 1892 and raised to an earl and viscount in 1901. His only son Frederick, a lieutenant in the King’s Royal Rifle Corps, was killed in action in December 1899 during the Boer War, so the earldom (of Kandahar, Pretoria and Waterford) and viscounty (of St. Pierre) devolved to his surviving sisters. His son was awarded the first Victoria Cross given posthumously in 1900.

Lord Roberts died at St Omer, France during a visit to the Indian troops serving in France in November 1914. After lying in state in Westminster Hall he was given a state funeral. Only one other non-Royal in the 20th century was given this honor, Winston Churchill.