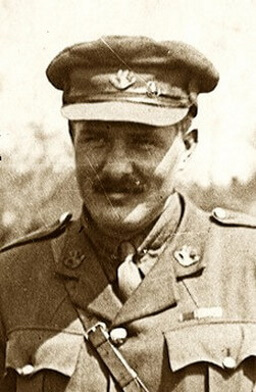 James joined the Border Regiment as a Second Lieutenant in 1904 and was appointed Staff Captain in November 1906. He served in Gallipoli as a Transport Officer where he was wounded. In June 1915 he rejoined his battalion on the Western Front. In June 1916 he joined the Newfoundland force and was supervising their training reserves when the battalion was destroyed at Beaumont Hamel in July. After the end of the Somme offensive in November 1916 he gained the rank of temporary Lieutenant-Colonel.

During the action at Vieuz Berquin, France on 11-12 April 1918 Lieutenant-Colonel James Forbes-Robertson saved the line from breaking. As the forward troops were retreating, he made a reconnaissance on horseback in full view of the enemy under heavy machine-gun fire and led a counter-attack to establish a new forward line. After his horse was shot from under him he continued on foot to steady his men and inspired confidence by his disregard for personal danger by leading a counter-attack which successfully re-established the front line. On the second day, he lost another horse and again continued on foot to establish a defensive line for his men to safely withdraw.

His citation stated: "For most conspicuous bravery whilst commanding his Battalion during the heavy fighting. Through his quick judgment, resource, untiring energy and magnificent example Lieutenant Colonel Forbes-Robertson on four separate occasions saved the line from break and averted a situation which might have had the most serious and far-reaching results. On the first occasion when troops in front were falling back he made a rapid reconnaissance on horseback, in full view of the enemy, under heavy machine-gun and close range shell-fire. He then organized, and, still mounted, led a counter attack which was completely successful in re-establishing our line. When his horse was shot under him he continued on foot. Later on the same day, when troops to the left of his line were giving way, he went to that flank and checked and steadied the line, inspiring confidence by his splendid coolness and disregard of personal danger. His horse was wounded three times and he was thrown five times. The following day when the troops on both his flanks were forced to retire, he formed a post at Battalion headquarters and with his battalion still held his ground, thereby covering the retreat of troops on his flanks. Under the heaviest fire this gallant officer fearlessly exposed himself when collecting parties, organizing and encouraging. On a subsequent occasion, when troops were retiring on his left and the condition of things on his right was obscure, he again saved the situation by his magnificent example and cool judgment. Losing a second horse, he continued alone on foot until he had established a line to which his own troops could withdraw and so conform to the general situation."