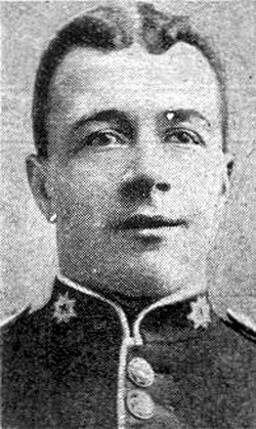 Frederick William Dobson was born in Northumberland, England on November 19, 1886. He was the son of Thomas and Elizabeth Dobson. On the outbreak of war, he was called up and joined the 2nd Battalion Coldstream Guards.

On September 28, 1914, at Chavonne, Aisne, France, Private Dobson twice volunteered to go out under heavy fire to bring in two wounded men. This undertaking involved crossing a good deal of open ground in full view of the enemy. Private Dobson, however, crawled out and found one of the men dead and the other with three wounds. He dressed the wounds and then crawled back, to return with a second volunteer Corporal Brown and a stretcher, on to which they put the wounded man and then dragged him back to safety, again over fire exposed ground. He was appointed a Lance-Corporal on November 21, 1914.

His citation stated: "For conspicuous gallantry at Chavonne (Aisne) on the 28th September, in bringing into cover on two occasions, under heavy fire, wounded men who were lying exposed in the open."

At the Battle of Ypres on December 8, 1914 he was badly wounded and shipped home. Back at the front he was wounded again on February 24, 1915 and invalided home. Then based in the UK, Corporal Dobson traveled around the North East in recruiting drives for the Tyneside Scottish and the Northumberland Fusiliers.

Lance-Corporal Frederick Dobson was invested with his Victoria Cross by King George V at Buckingham Palace on February 3, 1915. He died in November 1935 and is buried in Newcastle-upon-Tyne in North East England. His Victoria Cross is displayed at the Guards Regimental Headquarters, Wellington Barracks in London.