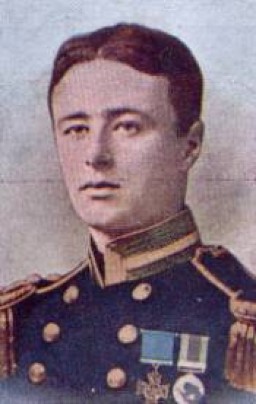 Eric G. Robinson was born at Greenwich to John Lovell Robinson and Louisa Aveline Gascoigne. His father was the chaplain of the Royal Naval College at Greenwich. At the age of 15, joined the Royal Navy and was assigned to the HMS Britannia in 1897. While serving on the HMS Endymion, Robinson participated in the suppression of the Boxer Rebellion in China in 1899-1901. In 1910 he was promoted to Lieutenant-Commander and served on several cruisers before the first World War. He was dispatched to the Mediterranean at the outbreak of hostilities aboard the battleship HMS Vengeance. The battleships of the Allied fleet had been bombarding the Turkish positions on the southern shore of the Dardanelles for weeks before the Royal Marines were tasked with a joint amphibious assault with a commando force of sailors to destroy the Turkish gun battery at Orkanieh. On the early morning of February 26, 1915, the force landed and were opposed by heavy gunfire. The Turkish soldiers had easy targets on the sailors in their white uniforms and were pinned down until Robinson was able to get behind the battery and lay fuses to destroy the position before Turkish reinforcements arrived.

A second operation on April 18 should have had him nominated for a second Victoria Cross, but instead he was promoted to Commander. In that operation he was able to rescue the seamen on board a captured British submarine HMS E15 after another British picket boat from the battleship HMS Majestic had hit it with several torpedoes to destroy it before it could be salvaged by the Turks and Germans. In August he was wounded and returned to England where King George V presented him with his Victoria Cross at Buckingham Palace.

Returning to duty in December 1915 in command of the HMS M21, he shelled Turkish shore positions throughout Egypt and Palestine until the summer of 1917. He was then posted to the Caspian Sea with a squadron of coastal torpedo boats to fight the Bolshevik forces along the coastline during the Russian Civil War.

Robinson’s promotion citation read: "Lieutenant-Commander Eric Gascoigne Robinson had been specially promoted to the rank of Commander in His Majesty’s Fleet in recognition of the distinguished service rendered by him on the night of the 18th April, 1915 as commanding Officer of the force which torpedoed and rendered useless Submarine E15, thus preventing that vessel from falling into the enemy’s hands in a serviceable condition."

Robinson first retired in 1933 as a Rear-Admiral, but with the outbreak of the World War II he volunteered for active service and for three years commanded convoys across the Atlantic Ocean. He retired again in 1942 at the age of 60.

He died at Haslar Naval Hospital on August 20 1965 and buried in the village church of Langrish in east Hampshire.