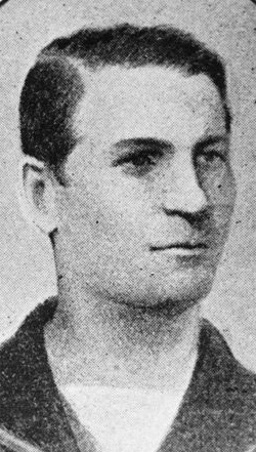 Edward Robinson was born in Portsea, Portsmouth in June 1838 and joined the Royal Navy at the age of 14.

Robinson was an able seaman on the HMS Shannon, a steam frigate launched in November 1855 from Portsmouth Dockyard. Under the command of Sir William Peel, the HMS Shannon landed a Naval Brigade which fought at the Siege of Lucknow and the storming of the Sikandar Bagh. Robinson was one of five crewmen from the HMS Shannon who won the Victoria Cross during these engagements.

The English guns were firing on the sepoy mutineers on the far side of the Goomtee River. They in return were firing on the English batteries and the English earthworks caught fire and the guns had to be abandoned. Robinson and other volunteers carried water bags from the rear to the earthworks in a successful attempt to put out the fires before the guns were destroyed. Robinson made five trips with water bags and was severely wounded on the fifth trip by a musket ball shattering his collar bone, and wounds to his shoulder and neck. Unconscious and lying in a trench, he was pulled to safety by other members of the Naval Brigade.

Robinson’s citation read: "For conspicuous bravery, in having at Lucknow, on the 13th of March 1858, under a heavy musketry fire, within fifty yards, jumped on the sand bags of a battery, and extinguished a fire among them. He was dangerously wounded in performing this service."

Edward Robinson received his Victoria Cross from Queen Victoria at Windsor Caste on January 4, 1860. Due to his service related injuries, he left the Royal Navy and took a position as gatekeeper at the Windsor Home Park. Robinson died in October 2, 1896 on the Windsor Castle estate and is buried in the Old Windsor Church Road Cemetery.

His Victoria Cross is displayed at the National Maritime Museum in Greenwich, London.