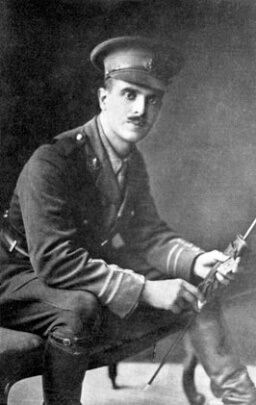 Frank Crowther Roberts was born in London England, the son of Reverend Frank Roberts, vicar of Saint John’s Church. He graduated from Sandhurst and was commissioned as a second lieutenant in the Worchester Regiment in March 1911.

Posted to Alexandria Egypt with his regiment in 1912, he was serving there on the outbreak of World War I. His regiment returned to England and then sent to reinforce the British Expeditionary Force in France in November 1914. As a Brigade Major in the 8th Division, Roberts was awarded the Military Cross for his actions during the Battle of Passchendaele (also known as the Third Battle of Ypres) in August 1917.

Roberts was serving as acting Lieutenant-Colonel in the 1st Battalion, Worcestershire Regiment during the March-April 1918 German Spring Offensive, west of the Somme at the village of Pargny, France when his actions earned the Victoria Cross. During the war he had been wounded three times.

Roberts’ citation read: "During continuous operations which covered over twelve days, Lt-Col Roberts showed most conspicuous bravery, exceptional military skill in dealing with the many very difficult situations of the retirement, and amazing endurance and energy in encouraging and inspiring all ranks under his command. On one occasion the enemy attacked a village and had practically cleared it of our troops, when this officer got together an improvised party and led a counter-attack which temporarily drove the enemy out of the village, this covering the retirement of troops on their flanks who would otherwise have been cut off. The success of this action was entirely due to his personal valour and skill."

Roberts served with his battalion until the Armistice of 11 November 1918. During the interwar period, Roberts served in a variety of posts until June 1939 when he was promoted to the rank of Major-General, three months before the beginning of the Second World War. In December 1939 he retired and with his wife, settled in Derbyshire. Childless, he remained there until his death on 12 January 1982.